By His Holiness The Dalai Lama
A profound summation of H.H. the Dalai Lama's life, teachings, and service of humanity.

In this profound summation of his life, teachings, and service of humanity, His Holiness the Fourteenth Dalai Lama along with his trusted collaborator Sofia Stril-Rever (a Sanskrit expert and an interpreter for the Dalai Lama) begin with an explanation of his three spiritual commitments — as a human being, a Buddhist monk, and as the Dalai Lama and beloved leader of millions of Tibetans. As a human being, he salutes the vital need for affection:

"Our life depends on others so much that at the root of our existence there is a fundamental need for love. That is why it is good to cultivate an authentic sense of our responsibility and a sincere concern for the welfare of others."

At the heart of the Dalai Lama's vision of the world is a deep and abiding respect for the spiritual practice of compassion:

"True compassion does not stem from the pleasure of feeling close to one person or another, but from the conviction that other people are just like me and want not to suffer but to be happy, and from a commitment to help them overcome what causes them to suffer. . . . This attitude is not limited to the circle of our relatives and friends. It must extend to our enemies too. True compassion is impartial and bears with it a feeling of responsibility for the welfare and happiness of others.

"True compassion brings with it the appeasement of internal tensions, a state of calmness and serenity. It turns out to be very useful in daily life when we're faced with situations that require self-confidence. And a compassionate person creates a warm, relaxed atmosphere of welcome and understanding around him. In human relations, compassion contributes to promoting peace and harmony."

The Dalai Lama is a realist and knows that there are formidable obstacles to the practice of compassion, including selfishness, attachment, anger, and hatred. Although living in exile for many years, he has an optimistic frame of mind. The Dalai Lama also calls himself "a professional laugher" and a lover of smiles. Other things that sustain him are daily prayers, meditation, and physical exercise. With simple elegance, the Dalai Lama recounts his childhood and being discovered as the reincarnation of the Thirteenth Dalai Lama. He reflects upon his lineage and his calling to serve others.

In the section of the book where he considers his experiences as a Buddhist monk, the Dalai Lama probes his ideal of the Bodhisattva, the necessity of spiritual practice to become a better human being, the value of brotherly exchanges between religions, his pilgrimages to holy places, his views on impermanence and interdependence, his advocacy of transforming the world through the transformation of our minds, his fascination with science, and his belief in ecological responsibility.

The last section of the book covers the Dalai Lama's becoming the temporal leader of Tibet at age 16, the 1959 insurrection in Lhasa, his forced exile, his many appeals to nations and organizations on behalf of Tibet, his proposal that his homeland become a sanctuary of peace for the world, his sadness over the human rights violations taking place during the Chinese occupation of Tibet, and his hopes for the future. Since 1959, His Holiness the Dalai Lama has received more than 84 awards, honorary doctorates, and prizes in recognition of his messages of peace, nonviolence, universal responsibility, and compassion. He has authored more than 72 books.

Try a Spiritual Practice on Love 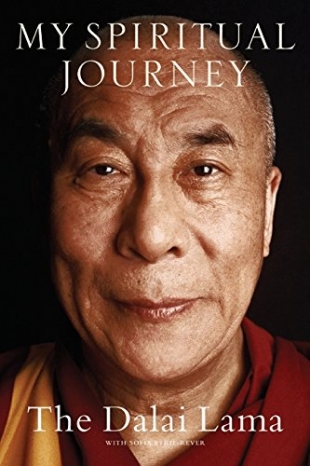