Why Did Jesus, Moses, the Buddha, and Mohammed Cross the Road? Christian Identity in a Multi-Faith World

By Brian D. McLaren
A credo for a bold, brand-new world of multi-faith action based on a deep, true hospitality rather than hostility.

The prolific and always profound Christian adventurer Brian McLaren begins this timely and imaginative exploration of "Christian identity in a multi-faith world" with the question: "Why did Jesus, Moses, the Buddha and Mohammed cross the road?" He uses this set-up for a joke as an opportunity to share his perspective on the interaction among the world's religions which he calls practical, pastoral, and constructive.

Who will be attracted to this approach to a strong but kind Christian identity? McLaren hopes it will speak to thoughtful Christians, especially those in leadership positions who may help steer churches towards a new multi-faith paradigm. He also wants to reach out to the new generation of young Christians.

There are many of us who, like the author, lament the long and disgusting tradition within Christendom that builds the faith on hatred and conflict with other religions and holds tenaciously to the doctrine that Christians are the only ones with access to the true path. McLaren writes of the novelist Anne Rice's recent defection from Christianity which he sees as an example of Conflicted Religious Identity Syndrome (CRIS).

A major reason so many people are leaving the fold is their disappointment with Christian communities that emphasize hostility (the sense that the other is the enemy) rather than the spiritual practice of hospitality which was so eminent in the life and deeds of Jesus. McLaren poses a key question:

In order to address the contemporary multi-faith scene, McLaren takes us on a rollercoaster ride through a bellwether book in the 1970s, a revelatory comment by a mentor, the dangers of uncritical loyalty to Christian ancestors, the continuing power of an oppositional religious identity based on an "us versus them" paradigm, and the necessity for believers to rethink church history and its penchant for domination.

McLaren then proceeds to outline some fresh re-workings of Christian doctrines and liturgies in ways that accentuate healing hostility and nurturing benevolence toward other religions. Here he discusses the creation story and original sin; the distorted doctrine of election and chosen-ness; the reframing of the Trinity to bring about harmony and unity; the development of a strong, benevolent Christology; and the muscular reinvention of the work of the Holy Spirit as a spur to moving and working in each religion.

The last two chapters cover the liturgical and missional challenges of the Christian communities around the world. Creative options abound in McLaren's survey of the Church Year, the sacraments of baptism and the Eucharist, the activities of children in Sunday School classes, and reading the Bible responsibly.

In his writing on mission, the author circles back to the meeting between Jesus, Moses, the Buddha, and Mohammed and imagines that they were friends opening to each other and sharing freely. All the religions as companions and allies along the spiritual path can work together to bring shalom to a weary and war-torn world. They can walk and talk and pray, but the times are ripe for them to also act in concert through love, kindness, compassion, and justice. There is a bold and brand new world out there for a multi-faith renaissance based on deep and rich and true hospitality! 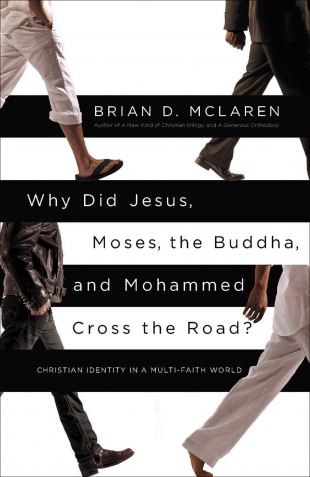