By Susan Schorn
An account of how 15 years of karate training taught Susan Schorn how to handle fear, anger, discipline, and self-improvement.

Susan Schorn grew up as a frightened, uptight, and frequently angry girl. Her kindergarten teacher described her as a child who acted "like a little old lady." While finishing her Ph.D. in English literature, a friend invited her to visit a dojo in Austin, Texas. Schorn had trained in karate at a Korean school during college and really enjoyed punching, kicking, and yelling. So she joined Sun Dragon martial arts school. Her teacher Sensei Suzanne is an expert at teaching women and children to protect themselves. Schorn chose to take Kyokushin training; it's a fierce brand of karate embodying zeal and fervor.

Schorn uses Zen proverbs as the titles for each chapter in the book. They give us access to this karate form. Here are a few of them to ponder:

• Fall down seven times, get up eight.
• If you want to feel safe, be prepared to feel uncomfortable.
• You're doing it all wrong. And that's perfect.
• We are connected by the distance between us.
• What you're good at is less important than what you're good for.
• Once a place becomes a part of you, you can leave it without regret.
• See yourself clearly, and you won't dread the scrutiny of others.
• Believe it or not, you are more than equal to the challenges you face. 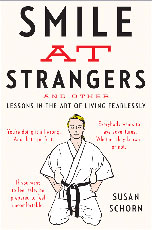