By Ezra Bayda
Practices for dealing with anger, fear, pain, and suffering.

Ezra Bayda is a Zen teacher affiliated with the Ordinary Mind Zen School, having received formal dharma transmission from Charlotte Joko Beck. A student of meditation for more than 30 years, he lives, writes, and teaches at the San Diego Zen Center in California.

In the 1970s, the author and his wife bought a house in northern California and began cultivating an extensive organic garden. They did this for eleven years. Then they both came down with severe immune system disorders. High levels of DDT residue were found in their blood. The toxins had been buried on their property before they bought it and had been transmitted to them through their organic produce. Bayda writes: "Try as we will, there's no way we can strategize and control our world so that difficulties won't befall us. The real issue is whether we will learn from the helplessness that arises when our strategies fail."

Bayda proves just how much he learned spiritually with this incredibly practical resource. He uses the oddball film Fast, Cheap and Out of Control to illustrate the different illusions we manufacture to pretend that we're in charge of our lives and to keep fear at bay. All we're really doing is creating "a substitute life" based on our mental constructs, opinions, judgments, expectations, and requirements.

Bayda believes a much more realistic approach to life is "practicing with fear." Instead of capitulating to this dread emotion, he suggests asking "What is this?" during the physical experience of the moment. He notes: "When we are willing to let the fear in, relating to it as 'what' instead of as 'me,' it loses its juice." The author even devotes a day to the practice of saying "yes" to fear with a lightness of heart. Although this approach does not take it away, it does lesson any false identification with it.

Bayda uses the same process of practicing with anger, pain and suffering, and distress. The last section of Being Zen deals with awakening the heart of compassion with material on letting be and loving-kindness. The epilogue contains a piece Bayda wrote just before his fiftieth birthday titled "What Is Our Life About?" It is a real gem. 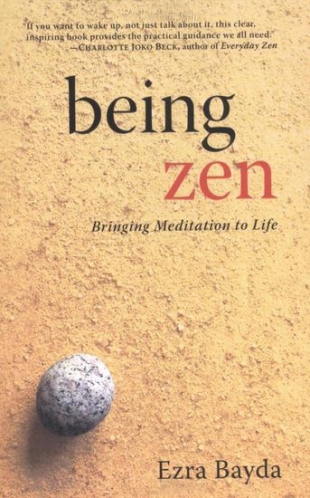