Archbishop Emeritus Desmond Mpilo Tutu passed away on the morning of 26 December 2021 in Cape Town at the age of 90. His close friend, His Holiness the Dalai Lama, was one of many world leaders who noted his enormous contributions to peace, compassion, joy, and love. His Holiness wrote:

“Archbishop Desmond Tutu was entirely dedicated to serving his brothers and sisters for the greater common good. He was a true humanitarian and a committed advocate of human rights. His work for the Truth and Reconciliation Commission was an inspiration for others around the world.

“With his passing away, we have lost a great man, who lived a truly meaningful life. He was devoted to the service of others, especially those who are least fortunate. I am convinced the best tribute we can pay him and keep his spirit alive is to do as he did and constantly look to see how we too can be of help to others.”

The name Desmond Tutu resonates profoundly with people all around the world. While his vigorous anti-apartheid activism in his native South Africa first propelled him into the glare of international news media, over the years he also was revered as a "moral voice" and someone who spoke with gravitas on a range of issues. While he was an Anglican Archbishop Emeritus and steadfast in his religious beliefs, Tutu placed great value on religious inclusiveness and interfaith dialogue.

Born in Klerksdorp, near Johannesburg, South Africa, in 1931, Tutu initially followed his father's example and obtained teaching qualifications. However, following the introduction of Bantu education in 1958, he decided to enter the ministry. He was ordained to the priesthood in Johannesburg three years later.

Following further theological studies in London, Tutu held several positions in teaching and theological work in South and Southern Africa. Then, in 1978, he was persuaded to leave his job as Bishop of Lesotho to become the new General Secretary of the South African Council of Churches (SACC). It this position, which he held until 1985, Tutu became a national and international figure.

The SACC is committed to fulfilling the social responsibility of the Church, and as its chairperson, Tutu led a formidable crusade in support of justice and racial conciliation in South Africa. His tireless work was recognized in 1984, when he was awarded with the Nobel Peace Prize. Then, following a short stint as the Bishop of Johannesburg, Tutu was elected Archbishop of Cape Town in 1986, an office he held until his retirement in 1996.

While many of Tutu's critics predicted that he would enter political life once the African National Congress and other political organizations had been reinstated, he never did. Instead, he became a key mediator in the difficult transition toward democracy. In 1996, he was appointed by President Nelson Mandela to chair the Truth and Reconciliation Commission, the body set up to probe gross human rights violations during apartheid.

Following the presentation of the Commission's report to the President in October 1998, Tutu was a visiting professor at several overseas universities. He was given honorary doctor degrees at a number of leading universities in the USA, Britain and Germany. He published books and in 2015 made a documentary film on finding happiness with his dear friend, His Holiness the Dalai Lama. 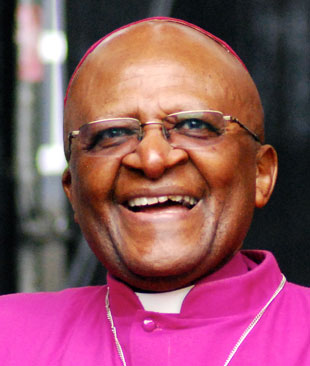