Early in the morning on May 7, 2019, Jean Vanier slipped away from the human form in which he'd given such great solace and hope to people, especially those suffering from developmental disabilities. He was known around the world for his profound leadership and values drawn from the Beatitudes — values that bless the poor and the poor in spirit. He was an inspiration to us at Spirituality & Practice for decades and will be greatly missed, even while we continue to benefit from his teachings.

Sadly, a report from an independent inquiry launched by L'Arche International in the summer of 2019 reveals that Jean Vanier was "accused of manipulative sexual relationships and emotional abuse between 1970 and 2005, usually within a relational context where he exercised significant power and a psychological hold over the alleged victims." None of the women who courageously came forward were themselves disabled.

Jim Wallis, the president of Sojourners, reached out to Tina Bovermann, Executive Director of L'Arche International, who told him, "... There was something in [Vanier] that sort of went directly to your soul ... and that makes it all the more incomprehensible and unfathomable to integrate what we now know. ... How do we hold the light and the darkness together? We are here at the intersection of spirituality, of sexuality, of deep longing for intimacy ... it's very disturbing." We at Spirituality & Practice feel this same collision of our respect for Vanier's visionary dedication with our distress over this expression of his shadow. You can read Bovermann's letter about the independent inquiry and Wallis' reflections on this page.

Vanier was born in Geneva while his father, the 19th Governor General of Canada, was on diplomatic service in Switzerland. During his childhood, his family lived in Canada, England, and France, fleeing Paris right before occupation by the Nazis during World War II. In 1945, Vanier and his mother assisted victims of a concentration camp; their suffering moved the Vaniers profoundly. In 1964, at age 36, Vanier dove even deeper into his true calling by moving in with two men with intellectual disabilities who had been living in an institution. Their home became the first L'Arche community.

It was followed by an international federation of communities in more than 37 countries, welcoming people of all faiths, abilities, and traditions. Together with Marie-Hélène Mathieu, Vanier subsequently founded Faith and Light, which also works with and for people with disabilities around the world. He has received numerous awards, including the French Legion of Honor and the Templeton Prize.

After becoming aware of the plight of people with developmental disabilities who were institutionalized — marginalized, depressed, and alone — Vanier opened his home to them in what was to become his lifelong ministry. "People with disabilities have called forth the child in me," he observed. "They have taught us all in L'Arche how to rest in love and mutual caring, how to celebrate life and also celebrate death, to speak about death, to accompany people who are dying."

Jean Vanier's radical view of the spiritual practice of hospitality took within its embrace strangers, outcasts, those who are different, the shadow sides of ourselves, and our enemies who have their own burden of pain. Loving, forgiving, and opening our hearts, he believed, is an alternative to the world's divisions and weapons. 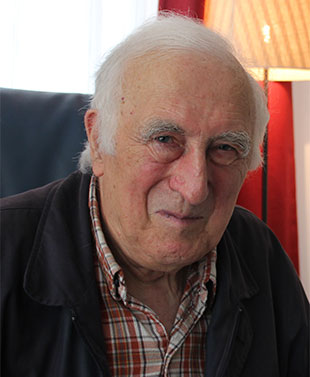