Pema Chodron is a Buddhist nun in the Tibetan Vajrayana tradition. She attended Sarah Lawrence College and graduated from the University of California at Berkeley. Ani Pema Chödrön taught as an elementary school teacher for many years in both New Mexico and California. While in her mid-thirties, she traveled to the French Alps and encountered Lama Chime Rinpoche, ultimately receiving her ordination as a Buddhist nun from his Holiness the Sixteenth Karmapa.

Since her ordination in 1974, she has taught and conducted meditation retreats in North America, Europe, and Australia. She served as the director of Gampo Abbey, the first Tibetan Buddhist monastery for monks and nuns in North America. Pema Chodron was a master teacher (acharya) in the lineage of Chogyam Trungpa Rinpoche, until she stepped down from this role in 2020 to protest lack of accountability for clergy sexual misconduct within the Shambhala community.

Pema Chodron sees sitting meditation practice as the basis for unconditional friendliness toward oneself and all beings. She has grounded her teachings about compassion in the Tibetan practice of "mind training," whereby difficulties are transformed into insights or, as she puts it, "Poison is good medicine." For example, under this way of looking at things, intimacy with fear and chaos is the beginning of wisdom.

In a relaxed teaching style, Chodron enables us to look at ourselves clearly, to touch the soft spot of our hearts, and to dissolve the barriers that separate us from others. Whether focusing on loving kindness, the art of peacemaking, or tonglen meditation practice, she enables us to develop a sense of sacredness and tenderness toward ourselves and the world in which we live. 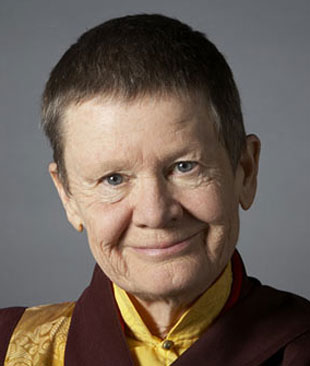