The Last Temptation of Christ

Directed by Martin Scorsese
A bold and imaginative portrait of the life of Jesus of Nazareth and his struggles.

"Christ passed through all the stages which the man who struggles passes through. That is why his suffering is so familiar to us; that is why we share it." So wrote Greek author Nikos Kazantzakis in the prologue to his 1955 novel The Last Temptation of Christ.

Kazantzakis was himself a tireless pilgrim intent upon understanding the mystery of religious experience. He described his life as "the incessant, merciless battle between the spirit and the flesh." He identified personally and profoundly with what he saw as the universal predicament of humankind, of which Christ's life was the model: "struggle between the flesh and the spirit, rebellion and resistance, reconciliation and submission, and finally — the supreme purpose of the struggle — union with God."

The Last Temptation of Christ, published in an English translation in 1960, was to Kazantzakis not a biography of Jesus but the "confession of every man who struggles." In a letter to a friend, the author wrote: "Some were shocked that Christ had temptations. But while I was writing this book, I felt what Christ felt . . . And I know definitely that great temptations, extremely enchanting and often legitimate ones, came to hinder him on his road to Golgotha."

These thoughts are echoed nearly four decades later by Martin Scorsese, director of the film version of The Last Temptation of Christ. Religion has been an important part of Scorsese's life and motifs such as penance, suffering, and redemption are evident in his previous films Mean Streets, Taxi Driver, Raging Bull, After Hours, and The Color of Money. He has wanted to make a film of Kazantzakis' novel for 15 years and believes the result, done with "conviction and love," is "an affirmation of faith and hope."

As in the novel, Jesus in the film is presented as a man who wrestles with the human side of his nature, faces multiple temptations, and finally comes to terms with his role as the Messiah. "This Jesus," explains Scorsese, "can understand people's problems; he experiences loss, desire, and other human feelings and frailties. That is why we can identify with his struggle and perhaps begin to deal with ours."

The Last Temptation of Christ is not a depiction of the historical Jesus nor a Biblical study of the man from Nazareth. It is a fictionalized portrait of Jesus based on a novel and filtered through the imagination of the filmmaker. And this story is more than another image of Jesus.

It recounts a process, a journey, a spiritual odyssey. This Jesus tries a number of paths to God: self-denial, meditation, reliance upon spiritual mentors, gathering of a community, teaching, action, prophecy, and, finally, suffering and sacrifice. His struggle will be familiar to anyone who has undertaken a religious quest.

Taking a cue from Kazantzakis and Scorsese, we realize that The Last Temptation of Christ offers an invitation to the filmgoer. This story can become a vehicle for a religious journey today.

• Think of the film as a chance to listen to the many different, even conflicting, voices inside yourself and to delve into your beliefs, values, priorities, ideals.

• Think of the film as an opportunity to contemplate your experience of guilt, loneliness, powerlessness, doubt, and fear.

• Think of the film as a close encounter with your understanding of evil and temptation.

• Think of the film as a probe of how you handle change and how you respond to the shape of things in the world.

• Think of the film as the means to assess the role teachers or sympathetic friends have played in your spiritual development.

• Think of the film as an occasion to deal with the impact of suffering and sacrifice upon your religious growth.

• Think of the film as a journey which will give you a fresh sense of the importance of struggle, love, and responsibility in your religious experience.

Because of the interest in how this film follows the Biblical accounts of the life of Jesus, and where it departs from them, we are providing a full plot synopsis.

Jesus (Willem Dafoe) is a carpenter in Nazareth who is troubled by inner voices and is unsure whether he is hearing messages from God, the devil, or his own pride. He has tried to reach God by fasting and self-mortification. Now as he struggles to accept the demands upon him, he rebels for a time by collaborating with the Romans, making crosses for the crucifixions of resisters.

The two people closest to Jesus do not understand his struggle with God. Judas (Harvey Keitel), a Jewish zealot who believes in violent overthrow of the Romans, charges that he is a coward. Mary Magdalene (Barbara Hershey), a prostitute who has loved Jesus since their childhood, is angry that he has rejected her.

Searching for God's plan for him, Jesus retreats to a desert monastery. There he comes face-to-face with his fears and desires. A young monk, Jeroboam, senses this stranger's special relationship with God and urges him to share his heart with the world. Judas, who has been assigned by the zealots to assassinate Jesus, finds his chance at the monastery but puts away his knife when he realizes that his friend may indeed be a messenger of God.

After rescuing Mary Magdalene from a crowd that is stoning her, Jesus preaches for the first time. But his message about love is not grasped by most of those present. Still a few men, including Peter, John, and Andrew, decide to follow him.

Jesus tries to understand his role and the message he is meant to share. After a heated discussion with Judas about their mission, Jesus decides to speak to the prophet in the wilderness. John the Baptist (Andre Gregory) baptizes him and then advises that love is not enough; he must take up the ax and root out evil.

Jesus goes again to the desert, vowing not to leave until God speaks directly to him. There he is tempted by a serpent who offers him the companionship of a woman, by a lion who promises worldly power, and by an archangel in the form of a flame who tells Jesus he is God and suggests they rule side by side. Recognizing Satan, Jesus rejects him.

He leaves the desert, stopping to recuperate at the home of Mary and Martha where he learns that John the Baptist is dead. Back with his disciples, he invites them to join him in a war against the devil. In a whirlwind of action, Jesus casts out demons, cures the sick, and proclaims that the world of God has arrived. He raises the brother of Mary and Martha, Lazarus, from the dead. He preaches and is rejected in his hometown of Nazareth. In Jerusalem, he attacks the merchants and the moneychangers in the Temple.

Jesus now confides to Judas that he has seen a prophecy from Isaiah and knows what he is to do. He must go to Jerusalem and die willingly on a cross. With his disciples, Jesus returns to the Temple, but as the crowd waits for him to lead them in an attack on the Romans, he refuses to give the signal. Later he tells Judas to turn him over to the authorities.

At the Passover meal, Jesus shares his spirit with his followers as they eat bread and drink wine together. That evening in the Garden of Gethsemane, he asks God to release him from his mission, then prays for strength. Taken into custody by the Romans, Jesus is questioned by Pontius Pilate (David Bowie), scourged, and sent to Golgotha where he is crucified.

The last temptation of Christ comes as a vision when Jesus is dying on the cross. A "guardian angel" in the form of a young girl appears and tells Jesus he has already suffered enough; he does not have to die. Instead, he can live like a normal man, marry Mary Magdalene, father children, and grow old in the comfort of a family. Jesus sees played out before him the life he could have if he is not crucified. After Mary Magdalene dies, he continues to raise a family with Mary and Martha. Satan, in the form of his "guardian angel," soothes his doubts about moving from one woman to another.

Near the end of his life, Jesus encounters Paul (Harry Dean Stanton) who makes him realize how much humanity needs the crucified and resurrected Messiah. He is visited by Peter, Nathaniel, and John, who tell him that the Temple in Jerusalem has been destroyed and the Ark of the Covenant stolen. Judas appears and reminds them that Jesus was supposed to be the "New Covenant." Instead, Judas says, Jesus is betraying his mission by dying like a man.

Recognizing his true vocation, Jesus gets up from his death bed. Mustering all his courage and conviction, he prays for the opportunity to fulfill God's plan. He overcomes the last temptation and awakens. On the cross, he is triumphant: "It is accomplished."

Special DVD features include a commentary by director Martin Scorsese, star Willem Dafoe, screenwriter Paul Schrader, and film critic Jay Cocks; an extensive collection of research materials, production stills, and costume designs; some location production footage shot by Scorsese himself; a video interview with composer Peter Gabriel; and a stills gallery of the instruments used in the film. 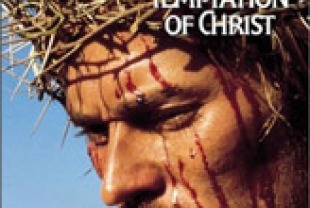