Shut Up and Sing

Directed by Barbara Kopple, Cecilia Peck
A rousing documentary that salutes freedom of speech and the resiliency and creativity of the Dixie Chicks.

The Dixie Chicks were sitting on top of the world in 2003 as the biggest-selling female group in history and the winners of seven Grammy Awards. They sang the National Anthem at the Super Bowl and were on a global tour sponsored by Lipton Tea. Just before going onstage in London, they heard about the war with Iraq. Natalie Maines, the lead singer, says in front of the audience, "We're ashamed the President is from Texas." The right wing in America grabs hold of the statement and cranks out an immediate tidal wave of anger against what they characterize as the unpatriotic comments. The Dixie Chicks watch as their most recent single plunges on the country charts and radio stations ban their work. They become the target of a well-organized hate campaign by right-wing blogs and websites. At one point, a man threatens to shoot Maines on stage in Dallas. Security is beefed up for her and members of the band.

Filmmakers Barbara Kopple and Cecilia Peck do a fine job conveying another fascinating chapter in the culture wars in America. Moving back and forth over a three-year period they show how the women respond to the media coverage, the world of country music, and their own solidarity as a band. Maines, Emily Robison, and Marie McGuire try to make the best of a bad situation as they watch their popularity dip and worry about what new direction to take with their music once it becomes clear that it certainly will no longer be in the country music genre.

Eventually, they begin work on a new album in Los Angeles with musicians from the rock world. They try to relax with their husbands and children but it is clear that they all feel drained by the ordeal of the backlash and the challenge of re-creating themselves for a new audience. Kopple and Peck's rousing documentary salutes freedom of speech and the resiliency and creativity of the Dixie Chicks. 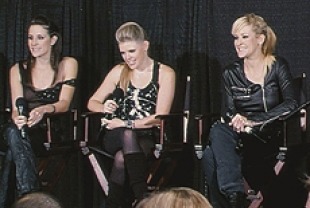 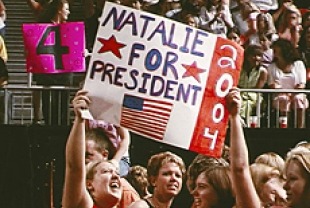