In the Valley of Elah

Directed by Paul Haggis
A riveting film that evokes compassion for for the soldiers who have served and are serving in Iraq at great danger to their bodies, minds, and souls.

Hank Deerfield (Tommy Lee Jones) is a retired military police officer. He and his wife Joan (Susan Sarandon) have raised two sons, both of whom followed him into the service. The older son was killed in a military training accident in the States. The younger one, Mike (Jonathan Tucker), has served in Iraq for 18 months. When Hank gets a phone call informing him that on his first weekend home, Mike has gone missing and is reported AWOL, he decides to travel to New Mexico to help locate him. Hank is a by-the-book military man, who polishes his shoes every morning, makes sure his pants have just the right crease, and salutes others in the service with pride. Noticing that the American flag is flying upside-down at a local school, he stops to give the immigrant groundskeeper a lesson in etiquette. An upside-down flag is an international distress symbol. It means, "We don't know what we are doing, so come help us." Little does Hank know how true this message really is.

At the military base, Hank meets with Lt. Kirklander (Jason Patric) who is in charge of the missing person operation. The case becomes a murder when Mike's charred body parts are found in a field near the base. Kirklander hints that Mike could have been killed by Mexican drug dealers in the area. Hank was not aware that his son used drugs, but others in his squad say it was common in Iraq.

Meanwhile, Detective Emily Sanders (Charlize Theron) of the local police has taken a special interest in the case. She eventually convinces her superiors that Mike was killed on town property, and it is their job to investigate. She has her own battles in the office where the male detectives are convinced that she slept her way into a job with their boss, Chief Buchwald (Josh Brolin). The pressures of raising a young boy alone and dealing with male chauvinism at work cause her to downplay the important cry for help from a distraught wife of a Iraq veteran who has killed the family dog in a fit of anger. Sanders also misses several important clues at the scene of Mike's murder, which Hank points out to her. He's been interviewing his son's buddies who served with him overseas and has been able to retrieve some puzzling and troubling videos from Mike's cell phone. Meanwhile, Joan comes to the base to see Mike's remains and returns home in a state of shock. She blames Hank for pressuring his boys to prove their manhood by becoming soldiers.

In one of the most poignant scenes in the film, Hank has dinner with Sanders and her son. The boy asks the stranger to read to him, and Hank decides instead to tell him the biblical story of David who fought the Philistine giant Goliath in the valley of Elah. To take on this dangerous mission, the young boy had to first fight his own fear and then stand his ground as the giant came closer to him. With one stone from his slingshot, David won the battle and carried the day. But the war in Iraq, Hank slowly realizes, is not like that. Courage in facing the enemy is not enough. Other dangers and moral challenges intrude upon the battlefield. It becomes apparent that Mike and his comrades have not been able to erase from their minds or hearts the terrible things they did in Iraq and have carried some of the violence home. Hank's journey to New Mexico rocks his soul and shatters his heroic understanding of the military in wartime.

In the Valley of Elah is directed by Paul Haggis from his original screenplay based on a story he wrote with Mark Boal; the screenplay was inspired by a real-life case. The New England Journal of Medicine reports that 16 percent (one in eight) of returning Iraq veterans suffer from post-traumatic stress disorder. These men and women often can't hold down jobs and are incapable of intimacy and self-realization. The hell they have been through does not end at the end of their overseas tour. They replay their nightmarish experiences of personal peril and violence again and again.

Paul Haggis, who exposed moviegoers to the racial enmity which continues to divide Americans from each other in Crash (The Academy Awards' Best Picture in 2005), has rendered us another moral service with this riveting drama about war-wounded Iraq veterans. This is a subject that has been downplayed by the media and overlooked by the general public who, like Hank, would prefer to think that the Iraq war (any war, really) has meaning and value and is something dedicated and good men and women can handle. After experiencing In the Valley of Elah you will have more compassion than ever for the soldiers who have served and are serving in Iraq at great danger to their bodies, minds, and souls. 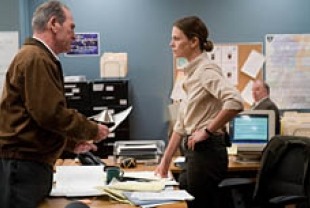 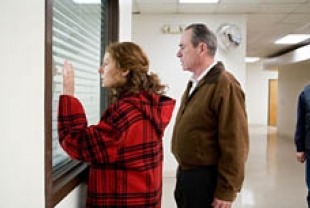 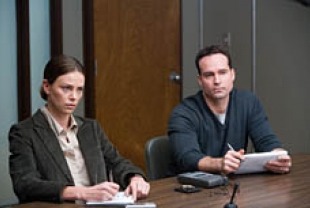 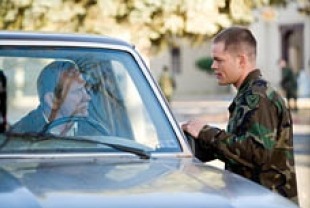