Directed by Gus Van Sant
A sad portrait of a teenager who refuses to take moral responsibility for his actions.

Alex (Gabe Nevins) is a sixteen year old who lives in Portland and comes from a broken home. His girlfriend Jennifer (Taylor Momsen) wants to have sex with him but he is not interested. The only thing that gives him any pleasure is skateboarding. His friend Jared (Jake Miller) takes him to a place called Paranoid Park where kids try their latest moves. It is in a grungy part of town. While taking a break from the skateboarding, Alex is responsible for the death of a railroad security guard whose body is later found cut in half by a train. A detective comes to his school and questions the skateboarders.

In Gus Van Sant's latest drama on teenagers, he probes the ways in which Alex deals with what has happened. It is obvious that he wants to discuss the matter with someone but no one is there for him except Macy (Lauren McKinney), a girl from school who suggests that he write down his experience as a way of processing his emotions. Alex takes her advice but little comes of it.

It is sad to see a boy who is unable to heed the cry of conscience or take responsibility for what he has done. At one point he talks about the importance of the war in Iraq but he is numbed by the war in his own soul over what he should do. In the short term, Alex escapes by avoiding his role in the death of another human being. In the long run, he will have to face the consequences of his actions as the incident plays itself out in his mind over and over for the rest of his life. 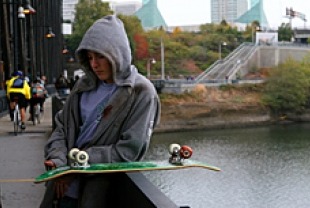 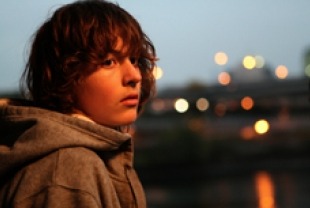