Directed by Ziad Doueiri
A cross-cultural gem whose adolescent characters struggle to keep their souls alive in the midst of war.

This fresh and emotionally vibrant coming-of-age drama is set in the Lebanese city torn apart by war in 1975. Writer and director Ziad Doueiri plops us smack dab in the middle of the lives of a Muslim adolescent and his friends. After 31 people are killed in an attack on a bus outside their school and classes are cancelled, these youngsters find themselves with plenty of time on their hands. As they try to enjoy this freedom, despite the presence of troops and snipers all over the city, their experiences take on a heightened quality. In this sense, West Beirut is similar in spirit to John Boorman's Hope and Glory, which is set in London during World War II.

Tarek (Rami Doueiri) lives with his mother (Carmen Lebbos), a lawyer, and his father (Joseph Bou Nassar), an intellectual, in West Beirut. He and his best friend Omar (Mohammad Chamas) are making super-8 films and yearning to unravel the mysteries of sex. Tarek takes a shine to May (Rola Al Amin), a pretty Christian girl who moves into their neighborhood. The three of them have several adventures in the chaotic streets patrolled by Muslim militias. Tarek's most exotic experience is a surprise visit to a famous bordello run by Madame Oum Walid (Leila Karam) where he learns that peace doesn't come easily when religious hatred is involved.

The main characters in West Beirut are Muslims, a group that has been given short shrift in American movies. In this cross-cultural gem, we are touched by Tarek and his family as they struggle to keep their souls alive in the midst of war. His parents watch in dismay as their city becomes a battleground and its citizens are caught in the crossfire. Despite the lack of work, food, and other necessities, they do not want to leave their home. Tarek, who unlike his parents has not been through something like this before, alternates between facades of nonchalance and determined bravery. Only to Omar does he let down his guard. In the end, his sobs reveal the depth of what this family, and the Lebanese, have lost. 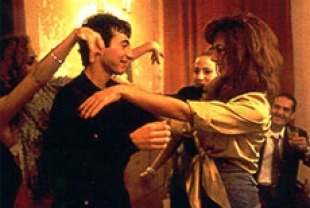 Read our reflections on West Beirut