Directed by Brent Pierson, Scott Galloway
An extraordinary documentary about a talented African-American and a community brought to life by his artistry, enthusiasm,and generosity.

Every once in a while, a film comes along that is a total surprise: you discover that the images and people on the screen are taking you somewhere you've never been before. It doesn't happen very often but when it does you can feel the magic in your body and your mind as wonder and delight sweep through you. A Man Named Pearl had that kind of effect upon us.

This enchanting documentary focuses on an extraordinary African-American man, a garden of exquisite beauty and love, and a community that has been brought to life by his artistry, enthusiasm, and sharing of the passion that moves him. Directors Scott Galloway and Brent Pierson take the measure of this man and bestow upon us a sense of pleasure in his creativity and willingness to pass on who he is and what he has learned to future generations.

Raised the son of a sharecropper, Pearl Fryar took a job at a can factory in Bishopville, South Carolina. Looking at a house in an all-white neighborhood with his wife Metra, he was told that he was not wanted in the neighborhood since "black people don't keep up their yards." Pearl moved into an all-black area and began a garden. He had a natural gift for topiary art, trimming and shaping trees and bushes into unusual shapes, like the main character in the popular movie Edward Scissorhands. He was also good at math and able to easily calculate and work with squares and circles and triangles. It wasn't long before Pearl won the "Yard of the Month" award in Bishopville. He was the first black man to be so honored.

The filmmakers present an entertaining and informative portrait of this expressive and optimistic topiary sculptor. Pearl, now in his late 60s, loves what he does in the garden and works around the clock on this ongoing project. Initially he got most of the plants from the scrap pile of a local nursery; the owner comments on how amazed he has been seeing what Pearl can do with their castoffs. Rejects of another kind — odd pieces of junk — also have a place in the garden. He's created whimsical junk sculptures which, he notes, don't have to be trimmed. All the trees and bushes have been shaped into geometric forms, including a square bush and a tree that looks like a fish skeleton. This artist exudes playfulness and an affection for the lush richness and variety of the natural world.

Pearl's three-acre garden receives approximately 5,000 visitors a year, and they can depend upon him to share stories, explanations about his art, and his feelings as a friendly and generous host. He refuses to charge any entry fees, although there is a donation box for those who want to contribute. Pearl especially enjoys talking with children from elementary, middle, and high school classes. He teaches at nearby Coker College where he inspires students to follow their own muse and to dedicate themselves completely to their art. Pearl has also contributed some topiary sculptures to the South Carolina State Museum.

One of the most amazing aspects of A Man Named Pearl is how the filmmakers depict the incredible impact this single artist has had upon the town of Bishopville. The director of the Chamber of Commerce shares a project to beautify the downtown area with some of Pearl's topiary sculptures. He hopes word will get out to tourists and encourage more people to stop rather than just drive through the town. The manager of Waffle House talks about a deal she made with the artist: he contributed some topiaries for the front of her building in exchange for breakfast on the house every day. Pearl's neighbors have been so impressed with what he has done that many of them have created topiary works in their yards as well. The minister at the New Bethel AME Church which Pearl and his wife attend reveals his most popular parishioner's solid Christian faith and his spiritual impact on everyone he meets. We are reminded of this aspect of his character when we read the words which are etched into the lawn at the garden: LOVE, PEACE, AND GOODWILL.

A Man Named Pearl is one of the best films of 2008 and deserves to be seen as it plays in theaters across the country. We will be sure to alert you when it comes out as a DVD. In the meanwhile, here is a summary of a few of the spiritual points made in this extraordinary documentary:

• There is nothing so worthless or junky that it cannot be used to create something of beauty.

• Find and follow you passion and know that it will take you where you were meant to go.

• "There's always gonna be obstacles. The thing about it is, you don't let those obstacles determine where you go." (Pearl Fryar)

• Always look on the bright side of things, and you will be a positive light in a dark world.

• Put love into what you do and people will respond with gratitude and joy.

• By giving yourself generously to your community, you enrich the planet.

• Pass on your talent by mentoring the next generation: what they carry away from you is your legacy.

• "Never ever become larger than the people that got you there." (Pearl Fryar)

• In our gardens, we can draw close to nature and nourish our souls.

• The ground you walk upon is sacred, and the place where you live can be a temple of God. 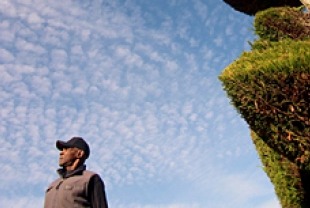 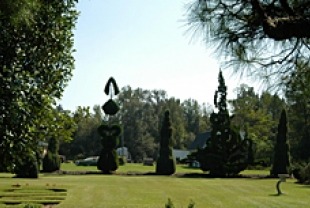 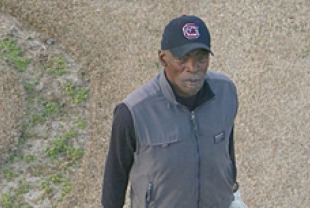