The Song of Sparrows

Directed by Majid Majidi
An Iranian gem which shows great compassion and respect for human beings and their failings.

Karim (Reza Naji) lives with his wife Narges (Maryam Akbari), two daughters and son in a small village west of Tehran. He works as chief ostrich wrangler at a ranch and has a deep love for these animals. However, Karim knows that things have taken a bad turn for him when one very wily ostrich escapes from its pen. Karim searches the countryside on his bike and tries to fool him out of hiding by donning an ostrich outfit and prancing around, but all his effort is to no avail. The animal is worth $2000, so Karim is fired.

While in Tehran with the intention of replacing his daughter's broken hearing aid, Karim is mistakenly identified as a taxi driver and soon finds a steady stream of businessmen who are willing to ride on his motorbike with him through the crowded streets of the city. He encounters some generous passengers and a few that try to take advantage of him. One even corrals him into helping him carry his possessions into a new place. Karim protests that he is not a porter but the man persists.

Karim is a kind man and a considerate father but the wear and tear of the city begins to change him. He becomes obsessed with carting things home — a new antenna for the television and a window frame they need but also a lot of junk. When Narges lets a neighbor take a blue door that he brought home, he retrieves it from her.

His young son Hussein (Hamed Aghazi) seems to have also developed an acquisitive nature. He and his buddies clean out the sludge from a water tank with the idea of breeding goldfish there and then selling them. The boy is convinced that he can become a millionaire.

Majid Majidi is one of our favorite Iranian film directors. All of his stories have a spiritual undertow to them and are rendered with great compassion and respect for human beings and their failings. Among those we have savored are Children of Heaven, The Color of Paradise, Baran and The Willow Tree. These films immerse us in the lives of their characters and show us the spiritual dimensions of everyday life and the way we treat others. The Song of Sparrows was Iran's submission for the 2008 Academy Awards for Best Foreign Language Film.

The director writes in a statement about his intentions with the film: "My aim was to portray contemporary people today vis-à-vis the modern world in order to show how the era of modernization has put human beings in a stranglehold. By this I do not mean that I am opposed to modernity, per se. Modernization should be at the service of humanity, yet people find themselves conquered by it. The result is that with each passing day we are becoming more distant from our own human values. . . . All of our values — including friendship, morality and beauty — become less important day by day. In opposition to this process, my aim was to say that we must return to our human essence or else face a major disaster in the future."

As is often the case, a breakdown in Karim's life opens the door for his spiritual renewal. While climbing around in his pile of things collected in the city, he falls and is badly injured. While bedridden, he realizes how much he depends on the kindness of his wife and neighbors. Karim gets back in touch with the beauty of the natural world and identifies with a sparrow that is trapped in his house. When he sets it free, we know that he is really ready to change. 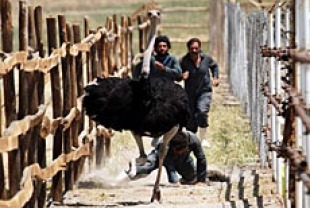 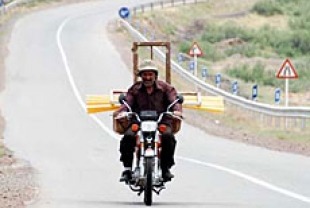 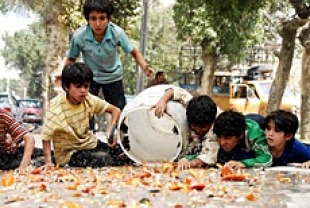 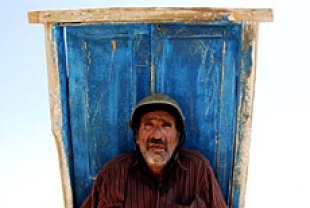