Directed by Neill Blomkamp
A bold and creative science fiction adventure that shows the dire consequences of hating strangers and ignoring the practice of hospitality.

In communities all over the world, refugees and immigrants are suffering rejection and abuse from the established residents. Hatred toward the outsider or the stranger is rampant, and it goes to extreme levels that are downright twisted. Prejudice is a disease of the mind in which we project our feelings of self-disgust, rage, alienation, and paranoia on others whom we perceive to be different. This sickness of the mind creates the "hostile imagination," a term coined by spiritual philosopher Sam Keen. The hostile imagination perverts community loyalties and threatens family solidarity. In the United States today, it is eating away at respect for the ideals of ethnic and religious diversity that traditionally have animated our pluralistic society.

District 9 is a bold and creative science fiction tale that takes this present-day phenomenon and deals with it through a story shot and set in South Africa. The backstory is presented by dozens of experts in various fields along with ordinary citizens who respond to questions about the aliens who landed in a gigantic spaceship which continues to hover over Johannesburg. The aliens left the vehicle and now a million of them are crammed into a ghetto called District 9.

These outsiders have an insect exo-skeleton crossed with that of a crustacean. They cause trouble in the city scrounging around for food — they are eating cans of cat food — and are derisively called "prawns." As one young man says in an interview about the extraterrestrial refugees, they're not important since they're not even human. Most everybody just wants them to leave.

In order to assuage the public's fears and discontent, Multi-National United (MNU), a large private company, is contracted to evict the aliens from District 9 to a concentration camp further from the city. Wikus van de Merwe (Sharito Copley), a weak-willed and mild-mannered man, is put in charge of this difficult operation. While checking out the shacks for contraband, he comes across a container with some black goo; after he inhales it, he finds his body is being transformed into an alien body. Wikus becomes the most hunted man in South Africa with a blood-thirsty enforcer (David James) from MNU trying to catch him while a Nigerian underworld kingpin wants him for his own selfish reasons. What they share is a fascination with guns and the creation of weapons with new firepower. The only ones Wikus can turn to for help are two aliens, Christopher Johnson and his young son.

Director and co-writer Neill Blomkamp has fashioned a griping sci-fi tale that accurately reflects the paranoia and xenophobia that is sweeping the globe. The producer for District 9 is Peter Jackson who was the immensely popular director behind the Oscar-winning Lord of the Rings franchise. Although the storyline falters into some very far-fetched feats of daring do by Wikus, and there are too many shoot-and-splatter scenes, this sci-fi adventure cancels out these negatives with its revealing portrait of human hatred and its terrible consequences.

District 9 reminds us how desperately the spiritual practice of hospitality is needed in these fearful and tense times. "Hospitality," writes Benedictine sister Joan Chittister, "is the way we come out of ourselves. It is the first step toward dismantling the barriers of the world. Hospitality is the way we can turn a prejudiced world around one heart at a time."

Special features on the DVD include deleted scenes; a commentary by director Neill Blomkamp; "The Alien Agenda: the filmmaker's log-three-part documentary"; "Metamorphosis: the transformation of Wikus"; "Innovation: acting and improvisation"; "Conception and design: creating the world of District 9"; and "Alien Generation: visual effects." 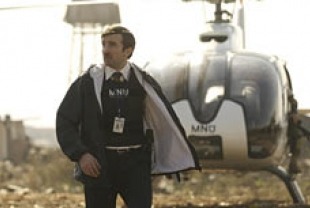 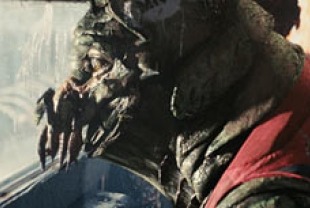 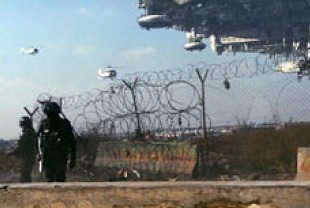