How to Train Your Dragon

Directed by Chris Sanders, Dean Deblois
An animated feature about a boy making friends with his community's enemy, the dragon.

Hiccup (voiced by Jay Baruchel) is a slight and scrawny Viking who lives in Berk, a mountainside village where his fierce, machismo father, Stoick (Gerard Butler), is tribal leader. The boy is apprenticed to Gobber (Craig Ferguson) whose main task is to keep him out of trouble. It's obvious that Stoick doesn't think his son has the stuff to be a real Viking warrior.

The village has been dealing with a "dragon problem" for a long time. These huge fire-breathing beasts periodically descend upon the village to snatch up all the livestock and destroy the crops. The Vikings only have clubs, swords, and spears to fight them off. The village teens go to a special training camp to learn how to kill dragons.

During one dragon attack, Hiccup sneaks out and uses his own specially built weapon against a dragon. He thinks he might have hit it but isn't sure until the next day when he is wandering in the nearby forest and comes upon a young black dragon with green eyes. Hiccup realizes he is injured and can't fly away. What's more the dragon is scared, just as he is. Hiccup brings some food and much to his surprise, the boy and the beast bond. Hiccup discovers another way of seeing the world through the dragon's eyes. Now his challenge is to convince the other kids in his dragon-fighting class, especially Astrid (America Ferrera), and his father that everything they thought about the dragons is wrong.

How to Train Your Dragon, an animated film directed by Chris Sanders and Dean DeBlois, is based on Cressida Cowell's novel of the same title, one in a series of eight children's novels. Those who were enchanted by the flying sequences in Avatar will experience the same exhilaration here as Hiccup rides Toothless between mountain peaks. Equally uplifting is the father-son reconciliation which is handled with just the right emotional heft.

Although it is touching to see the loving relationship that develops between the boy and the black dragon, it is quickly overshadowed by battle sequences in which these two become heroes. Supposedly this victory over a super gigantic dragon will end the warfare that has been the central dimension of Viking life. Every viewer will have to decide for him- or herself whether the new peace between the dragons and the Vikings will last (we split on this in our household). Can warriors change or will the need for enemies and the excitement of battle always lurk in the shadows of this village, as in our world?

DVD special features include commentary by the filmmakers, an interview about the "Viking Sized Cast," a featurette on the "Tech of Dragon," and the theatrical trailer. 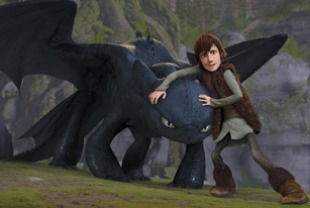 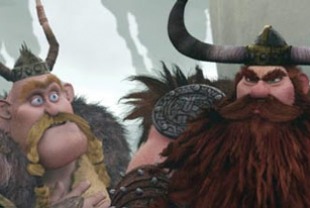 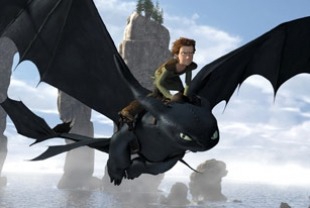