In the Footprints of Francis and the Sultan: A Model for Peacemaking

Directed by Jayasri (Joyce) Hart
A documentary about the fruitful encounter of Francis of Assisi, a Catholic monk, and Sultan al-Kamil, a Sufi Muslim.

We first read about the extraordinary encounters between St. Francis of Assisi and a Sultan in Edward Hays's wild, poetic, and imaginative book The Passionate Troubadour: A Medieval Novel about Francis of Assisi. In this fictional work, the thirteenth-century monk comes across as a forerunner of an inclusive, global spirituality that honors all those who walk with integrity on their own unique path. Hays quotes Peter's words in the Acts of the Apostles: "I see that God shows no partiality. Rather, in every nation whoever is in awe of God in an upright way is acceptable to God."

The historical 1219 meeting of St. Francis of Assisi and Sultan Malek al-Kamil in the Middle East is the focus of a DVD and study guide from Franciscan Media. In the Footprints of Francis and the Sultan: A Model for Peacemaking is a 46-minute two-part DVD written and produced by Sr. Kathleen A. Warren and Jayasri (Joyce) Hart who also directed. The narration recounts how Francis of Assisi went to Jerusalem during the Fifth Crusade but does not agree with the Pope's call to wage war on the Muslims. Instead the humble monk decides to meet the Sultan. These two men of God are supposed to be sworn enemies and instead they find that they have much in common, such as a firm belief in one God, an openness to strangers, a belief in serving the poor, and a yearning for peace.

This well-done DVD vividly shows the ways in which Francis of Assisi and Sultan al-Kamil model reverence and hospitality in their meetings. The second part of this documentary deals with the ideal of interreligious dialogue. The filmmakers have included interviews and commentaries by Franciscans Murray Bodo, Michael Cusato and Michael Calabria , as well as Fareed Munir, Imam Yahy Hendi and Archbishop Michael Fitzgerald. This resource is designed for study and discussion in churches, classrooms, and interreligious communities and social action networks.

We began this review with a book by one of our favorite writers Edward Hays and now we conclude with a few sentences on Franciscan iconographer Robert Lentz whose art has appeared repeatedly on Spirituality & Practice. On the DVD he talks about how he decided upon the symbols and images in his Peace Triptych; the center panel (used on the cover of the DVD) shows the Sultan and St. Francis embracing in heaven; the right panel depicts St. Francis with the Wolf of Gubbio; and the left panel shows the Sufi scholar who was the Sultan's spiritual guide and eventually brokered a peace treaty between the Muslims and the Crusaders. Lentz's rendering of these religious figures is very different from earlier European paintings.

Franciscan Media is also to be commended for the high quality of the study guide available for free to those who are interested, which is available here: FranciscanMedia.org/francissultan.

We have some practice suggestions for your own spiritual responses to In the Footprints of Francis and the Sultan: A Model for Peacemaking.

1. Join an Interfaith Dialogue Group.
"I have been a member of an interfaith dialogue group in Omaha for many years. I have found this practice crucial for being a Christian in today's world in part because it seems to me that the cultivation of genuine friendship — which at its core is what dialogue is about — is essential work that is both community and world sustaining. It is enriching because it keeps one's own faith humble, growing and flexible. Dialogue is also about learning new things, encounter with the 'other', and self-reflection. But at the deepest level dialogue is about friendship as a vibrant, mutual, and equal practice of love."
— Wendy Wright, a professor of theology, a Christian writer on family spirituality, and one of our Living Spiritual Teachers.

2. Become a Bridge-builder like Francis of Assisi.
In their book Interactive Faith: The Essential Interreligious Community-Building Handbook, Bud Heckman, former executive director of Religions for Peace-USA, and Rori Picker Neiss, former lead staff of Religions for Peace-USA, contend that in this heated-up multifaith world, we must become bilingual, speaking from our own faith perspective and able to dialogue with others as well. For starters, they offer some practical suggestions for those who want to get involved in the interfaith movement: subscribe to interfaith newsletters, open your door, learn by doing, host an informal dialogue, organize around an issue, tour houses of worship, share a meal together, start a book group, act it out, engage in social justice causes, hold a festival, celebrate music and the arts, facilitate reconciliation, and respond to hate, violence, and conflict with a public presence.

3. Heed the example of His Holiness the Dalai Lama.
In Sacred Ground: Pluralism, Prejudice, and the Promise of America author Eboo Patel offers ideas of how to follow in the footsteps of the Dalai Lama: "The first part of interfaith literacy is an appreciative knowledge of other traditions. This means learning about what we admire in other faiths, the beauty in their texts and rituals, the contributions that their members have made to our society, the type of knowledge that fosters friendships and facilitates work together. The second part of interfaith literacy is the ability to identify values that all religions share — compassion, mercy, hospitality, service. The third part is an understanding of the history of interfaith cooperation in our nation and our world. The final part is developing your own theology of interfaith cooperation, based on the texts, stories, and rituals of your own tradition. Taken together, these four parts are a knowledge base for cultivating pluralism in a religiously diverse society." 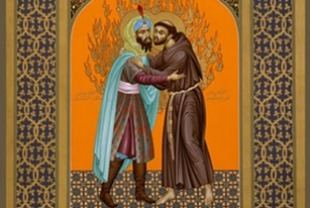