Directed by Taylor Guterson
An appealing film reveals the bright side of retirement for three men.

Retirement is a wake-up call for men who have defined their lives totally in terms of their work. Entering new territory, they discover that it is now or never. They can no longer pin their hopes and dreams on tomorrow.

In his debut as a film director, Taylor Gutterson focuses on three retirees and their various quests together and apart. Bob (Bob Burkholder) has the most energy and activities even though he is in his 80s. He has written a 600-page memoir looking back over his adventures and many relationships with women. He is feisty and opinionated.

In the opening scene of the film, Britt (Britton Crosley) is talking to a group of other older men at their weekly Monday night gathering in a local club. He explains how he has prepared for his upcoming solo boat trip to Hawaii and beyond. But when it is time to leave, he changes his mind and retreats. Bob is determined to get his old friend out of his rut. Finding a woman companion would be a first step.

The last member of this trio of elders is Dave (David Vander Wal), the youngest and the narrator of the film. He is a recent white-collar retiree who does not identify with the suburban values of his wife (Gail Shackel), who enjoys spending money, hosting cocktail parties, and planning trips to extravagant places. Even though he comes from a different economic class from Bob and Britt, he finds that he really enjoys their company. He drives Bob to various appointments and helps Britt set up his computer and get on the Internet.

After Bob helps him create a good profile on a dating site filled with photos of the three men, Britt connects with a talkative widow (Benita Staadecker). She is not at all put off by his shyness and, after seeing the messy small boat he has lived in for decades, asks him to move in with her.

Director Taylor Guterson has drawn out very naturalistic performances from the three nonactors in the lead roles; they have improvised many of their own scenes. One of the delights in Old Goats is that these men wake up each day with an intention to help make life easier for someone else. There is a primal sense of kindness in Dave and Bob's efforts to teach Britt about the Internet and advise him on dating. In her book Life Gets Better, Wendy Lustbader notes:

"The happiest elders I have seen are those actively involved in their communities, coloring their lives with the vibrant hues of engagement. Confidence in the power of kindness becomes a beacon, like a campfire on a dark night."

With its appealing mix of humor, sharing, and playfulness, Old Goats is definitely like a campfire on a dark night!

Special features on the DVD include a short film starring Bob and Britt; a tribute video to Bob Burkholder; deleted/extended scenes; Grandparents' movie review; and Old goats on Old Goats. 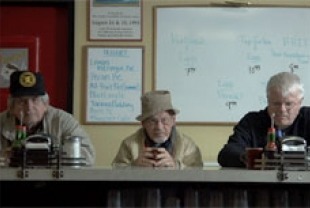 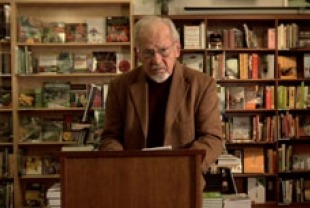 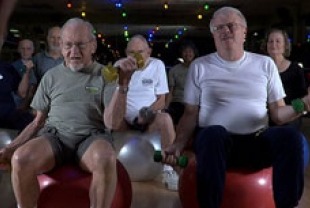 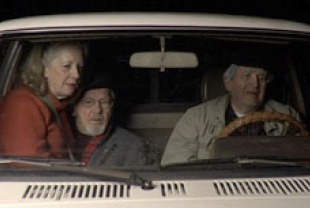