Directed by Laura Poitras
A shocking documentary about the violation of privacy by the U.S. government's surveillance programs.

"At its best, privacy shields and nurtures what is unique and authentic in people, while its absence or its violation often contributes to dehumanizing them," Janna Malamud Smith writes in Private Matters: In Defense of the Personal Life. "Privacy shelters, and thus offers sustenance to fragile virtues."

Citizenfour is the third in a trilogy of documentaries directed by Laura Poitras on post 9/11 America. The first was My Country, My Country (2006) which focused on the U.S. occupation of Iraq from the vantage point of an Iraqi doctor. In The Oath (2010), she probed the lives of Osama bin Laden's bodyguard, Abu Jandal, and driver, Salim Hamdam. Poitras set the stage for viewers to assess the wartime dehumanization policies of the U.S. and the terrorist tactics of Al-Qaeda; both have brought large doses of pain and death into the world. The film also included Hamdam's letters while serving seven years in prison at Guantanamo Bay.

While working on the third documentary about surveillance, Poitras was contacted by a former CIA analyst and National Security Agency contractor Edward Snowden who wanted her assistance in exposing the U.S. government's gathering and processing of the emails, cell-phone conversations, bank accounts, Web searches, and digital transactions of ordinary Americans. He is very insistent that the story of the extent of covert surveillance programs not be sidetracked by focus on his identity; he is referring to the phenomenon of "personality journalism" whereby substantive issues are set aside and the whistleblower, the leaker, or the journalist is made the story.

After communicating with her in encrypted emails, this whistleblower spends eight days in 2013 doing interviews in a Hong Kong hotel room with her and Glenn Greenwood, an investigative journalist for The Guardian and U.K. intelligence journalist Ewen MacAskill. This footage is included in the film. In Snowden's view, the invasion of citizens' privacy in England is even more massive than in the United States. There are no interviews with NSA officials but they are shown in film clips testifying under oath in various hearings that surveillance of ordinary Americans does not happen. Snowden responds that "we are building the biggest weapon for oppression in the history of mankind."

The tension in the Hong Kong hotel room is so strong that when a fire alarm goes off, it sets off fear and paranoia in us. Poitras also reveals the role of major corporations in support of NSA surveillance, including the phone companies and Internet service providers. Other footage covers the negative reactions of Germany and other European countries to U.S. abridgement of privacy rights.

At one point, Jacob Appelbaum, a computer security expert, speaking at a conference, notes that what people used to call "liberty" and "freedom," we now call privacy. And privacy is nearly nonexistent in the world today. Testimony by William Binney, another former NSA staffer, makes us think twice about what is involved every time we call, click, pay, search, bank, or travel. It's all being tracked and the links connected: where you go, where you stay, who you talk to, and even what you say. So much for liberty and freedom for all. 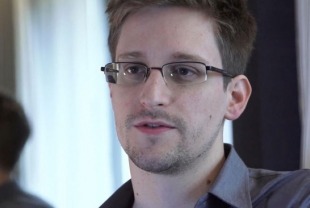 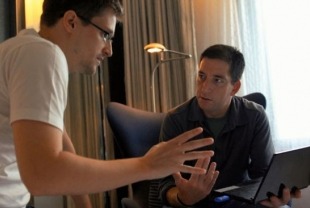 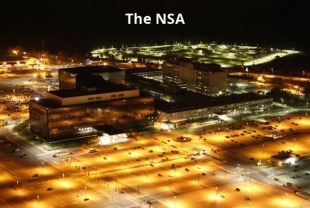