Stations of the Cross

Directed by Dietrich Brüggemann
A spiritual movie for practicing empathy and compassion for fearful fundamentalists.

In The Battle for God, Karen Armstrong depicts the rise and far-reaching spread of fundamentalism in Judaism, Christianity, and Islam. These Abrahamic faiths are great believers in tradition, exclusivist systems of truth, and zealous practice of their beliefs. Armstrong is sharply critical of their negativity: "All have neglected the more tolerant, inclusive, and compassionate teachings and have cultivated theologies of rage, resentment, and revenge."

Respect for the Fears of Our Brothers and Sisters

How does Armstrong suggest progressives deal with members of these growing movements around the world? "It is important to recognize," she writes, "that these theologies and ideologies are rooted in fear. The desire to define doctrines, erect barriers, establish borders, and segregate the faithful in a sacred enclave where the law is stringently observed springs from that terror of extinction which has made all fundamentalists, at one time or another, believe that the secularists were about to wipe them out."

Instead of fighting hate with hate, we must be "more faithful to the benevolence, tolerance, and respect for humanity which characterizes modern culture at its best." One approach, then, would be responding with empathy and compassion for our fearful fundamentalist brothers and sisters.

An Adversarial Stance toward the World, the Flesh, and the Devil

We have the opportunity to exercise our empathy and compassion while watching Stations of the Cross, an absolutely riveting German film organized around 14 chapters that refer to the stations of the Cross (Jesus Is Condemned to Death, Jesus Carries His Cross, etc.). Director Dietrich Brüggemann has structured the drama with one scene for each shot and the result is that our attention is focused on one idea or development. The screenplay by the director and his sister Anna Brüggemann is highly critical of the toxic teachings of a sect of Catholicism, the Society of St. Pius X, which is referred to in the film as the Society of St. Paul. Among its dogmatic assertions are the necessity of celebrating mass in Latin, a vituperative condemnation of the modernization of the Catholic church by the Second Vatican Council, and a totally adversarial stance toward the world and the flesh as forces dominated by Satan. 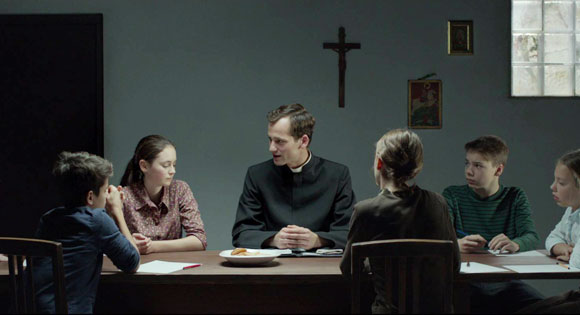 In the 15-minute opening scene titled "Jesus Is Condemned to Death," Father Weber (Florian Stetter) is teaching a small group of teenagers during their last class before their Confirmation and First Communion. The first thing we notice is the passionate way he delivers his messages to the children. He admonishes them to become "warriors of Jesus" in the unending battle against the Devil in music and in sex. He urges them to be "holy children" who make the most out of their "opportunities for sacrifice."

Out of all the members in the class, 14-year-old Maria (Lea van Acken) is the most responsive to Father Weber's vision of a rigorous and committed Catholic faith. She lingers after the others have left and asks him why God allows people to be sick. He responds that even illness can be seen as a sign of God's love for us. Maria is concerned about the well-being of her four-year-old brother Johannes (Linus Fluhr) who still hasn't spoken; his parents and several doctors are mystified by his illness.

Jesus Carries A Cross and So Does Maria

Maria's dogmatic and domineering mother (Franziska Weisz) is a judgmental force in her life. She does not hold her other children to the high standards that she sets for her eldest daughter. Maria's father (Klaus Michael Kamp) is not pleased with the constant criticism but he has given up. On a Sunday family walk, her mother torments Maria for looking grumpy in a family photograph. Later, at a meal, she brings Maria to tears.

The only solace this sensitive teenager has is taking care of Johannes and being comforted by Bernadette (Lucie Aron), the French au pair. Dealing with her mother's harsh attacks on her is a modern-day example of the troubling ways in which someone can carry a cross. 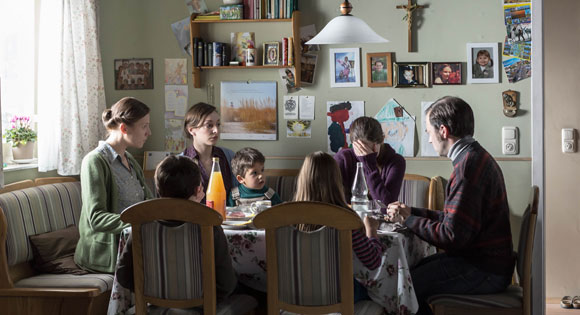 The One True Way

In "Jesus Falls for the First Time," Marie is at the library working on some mathematics homework. Christian (Moritz Knapp) takes an interest in her, and she is pleased. He sings in a church choir and invites her to come to the rehearsal. He tells her they do a lot of Bach chorales but also some soul and gospel music. The last two genres have been condemned as "satanic influences" by her mother and priest. Maria has been taught that their brand of Catholicism is the one true way and that to even attend other churches is forbidden.

Hoping that Her Sacrifice Will Produce a Miracle

Fearful of another angry outburst from her mother, Maria lies by telling her that a girlfriend has invited her to hear the choir at Don Bosco, a liberal church. Later at confession, she admits that she lied and also that she feels good that Christian talked to her. The priest then accuses her of having lust in her heart for this boy. By now, the cumulative effect of all the criticism, self-hatred, and fear has taken its toll on Maria's soul. Already nearly anorexic, she begins to eat very little. She has come up with a plan to sacrifice herself so that God will perform a miracle and heal her little brother by allowing him to speak. 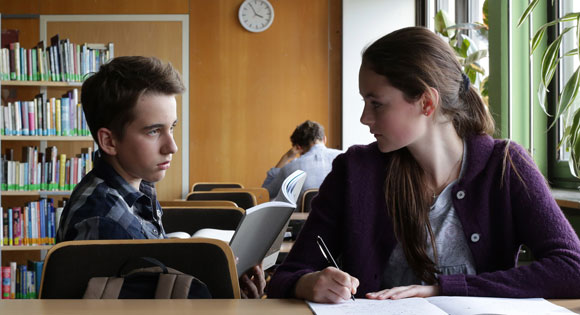 Control Not Doubt Is the Opposite of Faith

We wrote in our 1996 book: "To be spiritually literate, we need to embrace the world, believing that it is full of meanings which we can discover. But we cannot experience the full wonder, mystery and healing power of the world if we hold a totally negative picture of it. Physicist Albert Einstein was once asked 'What's the most important question you can ask in life?' He replied, 'Is the universe a friendly place or not?' "

As Stations of the Cross so vividly demonstrates, the theological understanding that separates humans from God is one that contends that the world itself is a dog-eat-dog place ruled by demonic powers; it therefore can bring only suffering and pain. Wendell Berry reacted to this understanding in this way: "Perhaps the greatest disaster of human history is one that happened to or within religion: that is the conceptual division between the holy and the world, the excerpting of the Creator from creation."

The source of many troubles resulting from fundamentalist views is that control, not doubt, is the opposite of faith. Believers like those in this film want answers and explanations for profound mysteries, including the reasons for illness. Others are more than willing to give them what they want. But great harm can result when we try to take charge, to lock God up in ideas and beliefs, and to make our homes into places where theological or Biblical principles are more important than family love. The alternative is to live in mystery.

Spiritual Practice
One of the best ways to practice mystery is for adults to model accepting it in the home. This means that parents, grandparents, and other significant figures in the lives of children make room for "not knowing" in their responses to difficult questions. Not everything can be answered or explained simply and quickly.

The iconoclastic Danish filmmaker Lars von Trier has stated that "All good cinema should be "like a stone in your shoe." Certainly Breaking the Waves is an example of his practicing what he preaches. John Michael McDonagh's Calvary is another film that raises more questions than it answers as it circles around a priest whose life and ministry are in jeopardy. Of Gods and Men is a deeply human French film about the mission and sacrifice of seven Catholic monks in Algeria whose lives are threatened by fundamentalists.

All of these films challenge us to think more clearly and feel more deeply about life, death, fear, and faith. Now Stations of the Cross joins this small circle of recent significant spiritual films.

Special features on the DVD include a director's Commentary, Why We Selected, and short film, "One Shot."