Directed by Nancy Meyers
A pleasant dramedy about work and a cross-generational friendship.

In the United States, 10,000 people will turn 65 every day for the next decade. Those in this demographic are living longer than ever before and are changing what it means to retire — if they choose to retire at all. David Lindeman, the Director of the Center of Tech and Aging at U.C. Berkeley, has noted that "it is a basic human interest to stay at your highest functioning level, and maintain your independence as long as possible."

That is the way Ben (Robert DeNiro), a 70-year-old widower views things. After his wife died three years ago, this former telephone-directory manufacturer fulfilled his role as grandparent, took adult education courses to maintain his mental acuity, and got in sync with his body through tai chi. Good stuff but not enough to satisfy his desire to stay active and be of some use to the world. 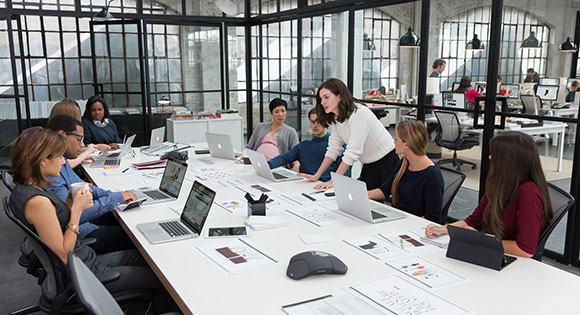 That's why he jumps at the chance to be a "senior intern" in an experimental project at About the Fit, an Internet start-up company created by Jules Austin (Anne Hathaway). This clothing retail operation is run by a band of youthful technorati who are all willing to work long hours to help it become a success. Ben wins the admiration of fellow-workers by his congeniality and little acts of kindness, such as counseling two young men on relating to women and offering his apartment as a place to sleep for another. 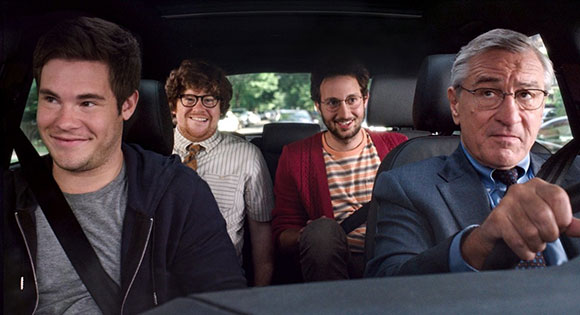 Jules is a driven micro-manager who rarely sleeps or eats and has a reputation for being difficult. She has a problem relating to her mother who has no interest or respect for her accomplishments. Ben is assigned to work with her, but at first she ignores him. He finally gets her attention by taking the initiative and cleaning up a cluttered area in the office.

Then he takes over as Jules's chauffer which gives him access to the major challenges facing her: the suggestion from investors that she find a CEO to run About the Fit and a way of dealing with her unhappy stay-at-home husband (Anders Holm) who takes care of their daughter (JoJo Kushner). 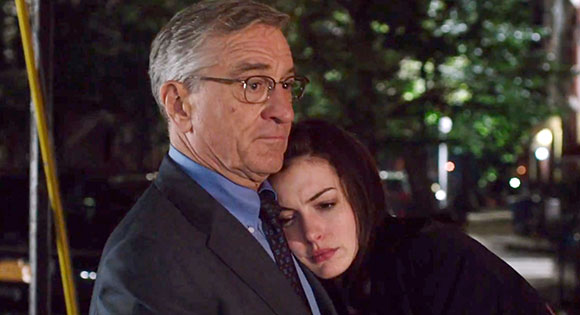 As is typical with movies written and directed by Nancy Myers, Intern begins with a bang with its treatment of businesses making the most of the talents, loyalty, and determination of older workers. De Niro shines as a suit-and handkerchief knight who befriends Jules and helps guide her through her crises. As a reward for his good deeds, he finds pleasure and happiness in a blooming intimate relationship with the company's a masseuse (Rene Russo).

Here is another enjoyable feature film for the baby boom generation, a dramedy that tries to embrace too many themes but manages to get itself back on track at the end.