Directed by Rabah Ameur-Zaïmeche
A bold and creative recasting of Jesus's disciple.

Over the years, we have cherished the perspective of Adolph Holl who wrote about Jesus:
"Whoever feels attracted to Jesus cannot adequately explain why. He must be prepared to be always correcting his image of Jesus for he will never exhaust what there is to know. Jesus is full of surprises."

The same might be said of Judas, who in the Gospels is depicted as the disciple who betrayed Jesus for 30 pieces of silver, handed him over to the authorities, and then in guilt went out and hanged himself.

But we know very little about Judas and so speculation about him is prodigious. He may have been a tax official given his role as treasurer of the disciples. Others see his outburst during the anointing of Jesus with precious oil as a sign that at one time he was a perfumer.

Scholars have suggested that Judas was a leader of the Zealots who advocated armed rebellion against the Roman invaders who occupied Palestine. Others interpret his treachery as a sign of anti-Semitism. The Gnostic Gospel of Judas presents him as a heroic figure who makes it possible for Jesus to fulfill his mission to die and divinize all who follow him. 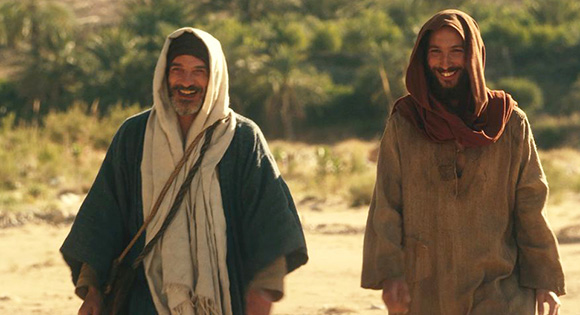 Rabah Ameur-Zaimeche is a French writer and director who is haunted by the many mysteries swirling around the story of Jesus. In the startling opening scene of the Story of Judas, we see this disciple (played by the director) climbing up a rocky hill to retrieve "the Galilean" (Nabil Djedouani) who has just spent 40 days fasting in a cave. Judas carries his rabbi on his back down to the village where Jesus is received by an enthusiastic group of children.

In a series of short vignettes, we are introduced to this Jewish teacher who travels light, senses the fears and anxieties of people about the end times, and refuses to have his life and actions entombed in stone or parchment. Judas, following his lead, expresses his pent-up anger by destroying the tables in the temple after Jesus has criticized those who have defiled this sacred space with their business enterprises. Next, Jesus saves the life of Bethsheba (Marie Loustalot), a woman accused of adultery and about to be stoned by a crowd. And later, her mother (Patricia Malvoison) sells her fine jewelry to purchase expensive perfume which she uses to anoint Jesus's face and head. The same sensuous emphasis comes across at the Last Supper when the man from Nazareth humbly washes the feet of his disciples, moving lovingly from man to man, cradling their toes and ankles in his hands. 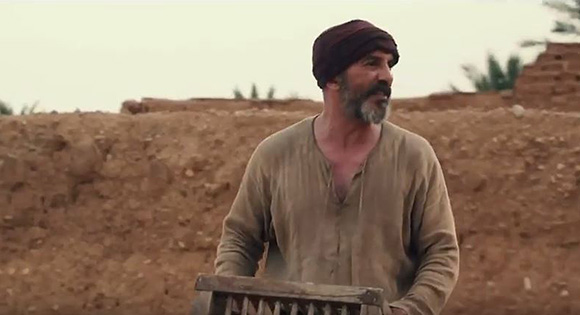 The wise, mystical, and imaginative Jesus in these scenes is, as Edward Hays once put it, "as free as the wind and as fenceless as the horizon." Judas, as his Master's right hand man, hires body guards to protect him while he is in Jerusalem and then tracks down a young scribe (Elliott Khayat) who has been writing down the prophet's words. This mission means that he is not present when Jesus is interrogated by Pontius Pilate (Regis Laroche) and sentenced to death.

Throughout the Story of Judas, Rabah Ameur-Zaimeche contrasts the zeal of Judas who is totally committed to Jesus with Carabas (Mohamed Aroussi), a holy fool who characterizes himself as "King of the Jews" and carries on his own personal war with the occupation by crying out "Death to the Romans." Following the death of Jesus and the other two criminals, Carabas is the one who knocks over the three crosses as we witness this act of courage from a distance. 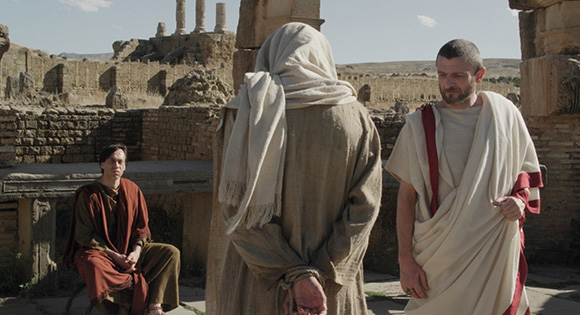 Story of Judas is an unusual, fragmented, and compelling drama filmed in Algeria by Irina Lubtchansky. It boldly reframes our view of Jesus and the role of Judas in his life and ministry. This sobering film slows us down, advises us to cultivate wonder whenever possible, and encourages us to drink deeply at the fountain of amazement.

Trailer only available in French at this time.