Directed by John Carney
A spunky romantic drama about a gifted singer and songwriter who is transformed by music and love.

John Carney is a gifted filmmaker who hit the mark with Once (2007), a musical romance with an Oscar-winning Best Song "Falling Slowly." He followed that one up with Begin Again (2014), a romantic drama set in New York City that focuses on the healing power of love. Sing Street is Carney's third winner! It is a charming and winsome movie that takes a familiar story about youth, playing in a band, and puppy love and turns it into a satisfying story about the transformative powers of pop music.

The year is 1985, and Conor (Ferdia Walsh-Peelo) lives in Dublin with his parents Robert and Penny (Aidan Gillen and Maria Doyle Kennedy), his older brother Brendan (Jack Reynor), a college dropout, and his sister Ann (Kelly Thornton), who's studying to be an architect. When family finances take a plunge, he is sent to a school run by the Puritanical Christian Brothers. There he is tormented by a skinhead bully and given a hard time by the principal. 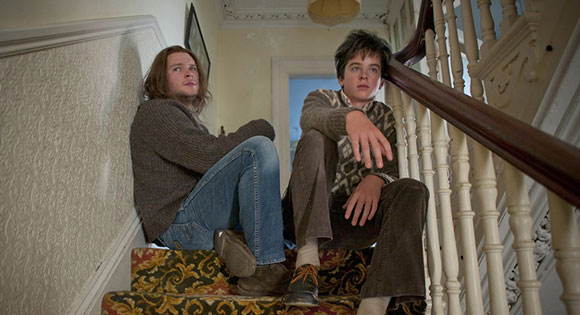 But even these two dark clouds fade into the background when Conor is swept away by Raphina (Lucy Boynton), a pretty 16 year old who tells him she is a model and plans to go to London to fulfill her dreams. In order to impress her, Conor invites him to star in a music video with his band. He then has to put together a band! With the help of Darren (Ben Carolan), a budding entrepreneur, he enlists an eccentric collection of geeks and dorks who are willing and able to practice, practice, and practice. The best of his bandmates is Eamon (Mark McKenna) who plays a large number of instruments and co-writes the songs with Conor.

Their first music video features Raphina in "Riddle of the Model" which has a Duran Duran feel to it. Brendan is impressed with his brother's willpower and creativity and becomes his music guru, dispensing wise advice about singing original songs versus covers and other aspects of the business of making it as a band. He's such a strong character that it's easy to understand why the film is dedicated to "For Brothers Everywhere." 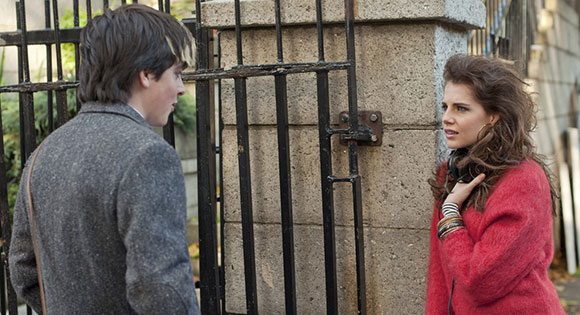 Writer and director Carney does a fine job conveying the slowly unfolding romance between Conor and Raphina. Impressed with his creativity, she decides to call him Cosmo. Although claiming to not know much about anything, she tells him: "Your problem is you're not happy being sad. But that's what love is: happy-sad." That's an apt observation, which comes true when Cosmo meets her boyfriend and realizes that he might lose her to an older suitor who could offer her more than he can.

Kieran Lynch's musical production is spunky with nods to Duran Duran, The Cure, Spandau Ballet, Joe Jackson, and others; Adam Levine contributed a new song, "Go Now." Original songs by Carney and others pepper the soundtrack, which is available on Republic Records. 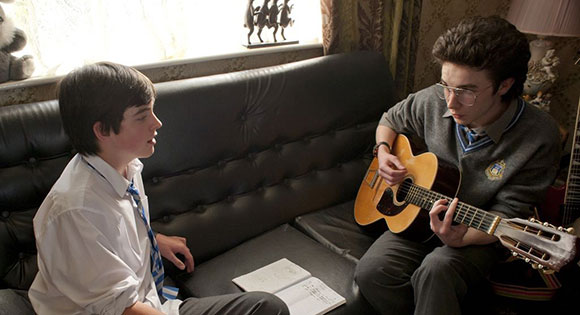 Sing Street follows in the train of Once and Begin Again as an impressive exploration of creativity as a dynamic and dramatic means of self-expression. Or as Julia Cameron puts it in The Sound of Paper:

"When we are willing to be open-minded, art and beauty come flooding into us in a thousand small ways. When we let ourselves see the possibilities instead of the improbabilities, we become as flexible and resilient as we really are. It is human nature to create. When we cooperate with our creativity, using it to live within the lives we actually have, we surprise ourselves with our level of invention."

By the end of Sing Street, Cosmo is surprised by his inventiveness in song writing and in love!