Directed by Terence Davies
A remarkable film that skillfully mixes the luminous and the harsh, the beautiful and the horrific parts of the human adventure.

Sunset Song is one of those unforgettable films that skillfully and emotionally mixes the luminous and the harsh, the beautiful and the horrific, the tender and the violent parts of the human adventure.

The drama is set in a rural community in northeast Scotland just before World War I. Director Terence Davies has taken Lewis Grassic Gibbon's 1932 novel and adapted it for the screen with his own personal shadings of familial strife, a deep appreciation of the central place of the natural world in the lives of those close to the land, and the implacable devastations that come through war and chauvinism. 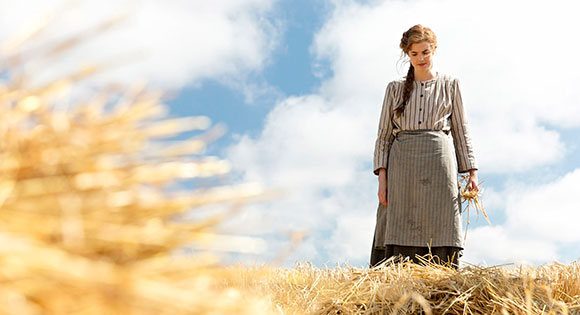 Davies weaves a magic spell with Michael McDonough's alluring cinematography, the lovely musical pieces which activate our emotions and memories, and the nuances of place and character conveyed in the narration. Best of all, the director provides subtitles for the Scottish dialogue, making it easier for all us to understand each word spoken.

Agyness Deyn, a model turned actress, plays the lead role of Chris Guthrie, who is first seen in the story as an exuberant young girl emerging from a field of corn. At school she is acknowledged as an excellent student, and she dreams of becoming a teacher. In one scene, we see her reading to her parents John (Peter Mullan), a successful farmer and a fierce Christian believer, and her exhausted and depressed mother (Daniela Nardini). 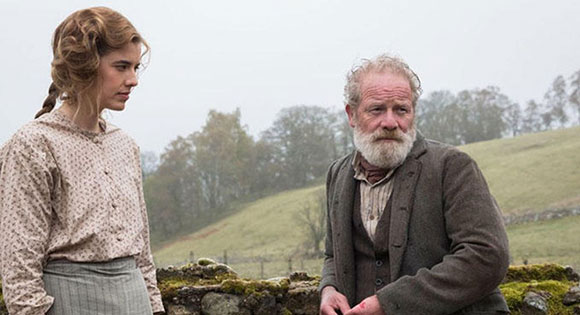 All is not well in this working-class family. John torments and physically beats his son Will (Jack Greenlees) so regularly that the young man is forced to leave home and establish a life elsewhere. His chauvinism drives his wife to commit suicide and with her death, Chris's dreams are shattered. She valiantly tries to use her love of nature as an antidote to the suffering that settles like a fog over her being.

Following her despised father's death by heart attack, Chris is released from her prison of fear and open to receive the adoration and love of Ewan Tavendale (Kevin Guthrie), a farm worker. It is only after meeting him that she is able to gaze upon her own naked body in a mirror. They marry and in a community-wide celebration they dance to a beautiful song which Chris sings. Later, as his wife gives birth, Ewan rejoices in the chance to be a father. 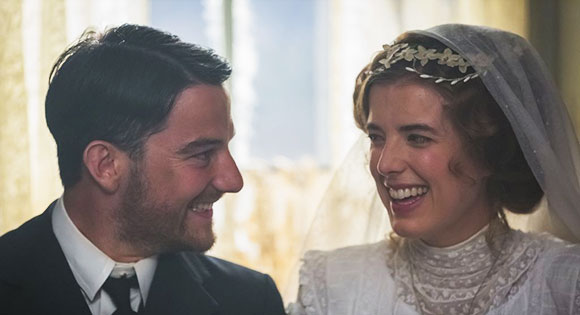 Big changes come to the community with World War I. Many of the men enlist. From the pulpit, the preacher calls the Kaiser in Germany "the Antichrist," insists that all Christian men go to battle, and condemns as cowards those who evade enlisting. The shadow of violence once again envelops Chris who already has endured her share of darkness and dread.

There is a mythic quality to Sunset Song, director Terence Davies's seventh film. We've noticed this in some of his other films, where a focus on particular characters is expanded to cover epic themes. We have been moved by The Long Day Closes, an inventive celebration of the poetry of ordinary life; Distant Voices, Still Lives, which explores the dynamics of a working-class family; The House of Mirth, an artful and meticulously rendered screen adaptation of Edith Wharton's melancholy novel about a spirited single woman unhinged by a series of betrayals; and The Deep Blue Sea, a 1950s story about an alluring woman who leaves her husband in search of sexual passion with a younger man.

Sunset Song is the kind of movie that you will want to see more than once in order to reflect upon all the touching interplay between the characters; the importance of knowing and loving a place that brings out the best in you; and the courage and patience that is needed by those who must bear the brutality of squaring off against darkness, pain, and suffering.