Directed by Clint Eastwood
A tense ethical thriller probing heroism and the fallibility of computers.

The title of this rousing cinematic account of the Miracle on the Hudson refers to the nickname of Chesley Sullenberger, the veteran pilot who on January 15, 2009, saved the lives of 155 passengers and crew aboard US Airways Flight 1549 when he landed the plane on the Hudson river after a bird strike had disabled its two engines. The title "sully" also refers to what seems to be an attempt by the National Transportation Safety Board to tarnish the reputation of the pilot who was being heralded as a genuine hero by the press and the American public.

Clint Eastwood, the 86-year-old director, has adapted Sullenberger's memoir Highest Duty: My Search for What Really Matters for the screen, and the result is a tense thriller that probes the present-day yearning for heroes who are hard-working and competent professionals and sensitive souls who put the safety and well-being of others over anything else. The film also provides a look at the routine safety investigation conducted by the National Transportation Safety Board (NTSB) after the crash. The board members (Mike O'Malley, Jamey Sheridan, Anna Gunn) question whether the plane's second engine was really not functioning and whether the pilot had time to return to LaGuardia Airport or land at Teterboro Airport in New Jersey instead of going into the river. Using computer simulations and then simulations with other pilots, they build a case that Sully and his co-pilot made the wrong choice. But can computers be trusted over human judgments and the intuition of experienced professionals in life-and-death situations? As Sully proclaims in the hearing, "Simulations take all humanity out of the cockpit." (We couldn't help but wonder if, in addition to their expressed concern for the safety of the passengers, the NTSB might have been protecting the financial interests of the airline and its insurance company who lost a plane in the river.) 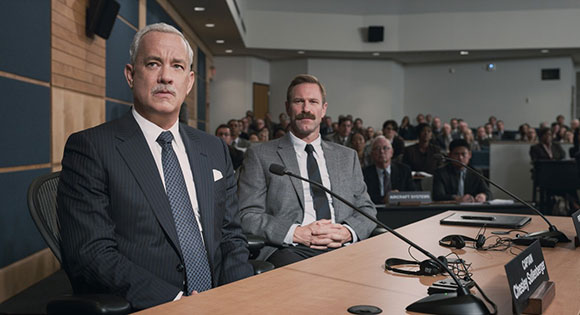 Tom Hanks as Sully does a fine job portraying how the pilot handled the incredible stress, doubts, and mental anguish as he faces an onslaught of media requests, is plagued by lack of sleep and nightmares, and suffers post-traumatic stress syndrome. Luckily, he has the solid support of his wife (Laura Linney) and his co-pilot (Aaron Eckhart). 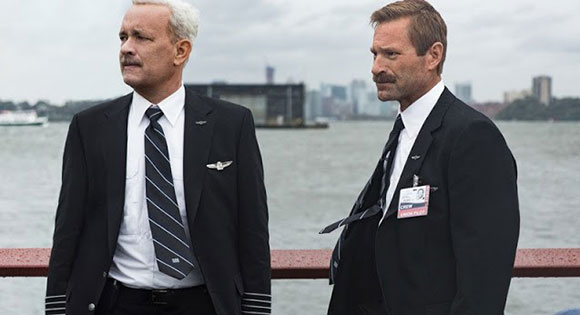 As one character says to Sully, his heroism was the best news New Yorkers had heard in a long time "especially with an airplane in it." In an inspiring scene, we see the Captain moving up and down the aisles of the sinking plane making sure that no one was still aboard. As we'd expect from an authentic leader and hero. This Good Samaritan is the last one to leave the plane.

Equally impressive and moving are the scenes of New York's first responders arriving to get the passengers out of the freezing river and off the plane's wings and into emergency care. With a wind chill of -5 degrees, time was of the essence.

Sully treats us to something very rare in contemporary films: a true story of human goodness showing up in times of tragedy and danger.