Directed by Hemal Trivedi, Mohammed Naqvi
A riveting documentary that explains the educational systems and violent changes that are rocking Pakistan.

The best documentaries take us behind the scenes and open our eyes to both the positive and the negatives sides of various groups. They refuse, in this dangerous and volatile world to capitulate to the popular and simplified vision of reality as dualism or "we vs. them." Among the Believers aspires to that kind of broad coverage of very different groups in today's Pakistan. Although we hear a lot about the war against terrorism, the media does not give much coverage to the reports of what is happening in that country during one of the bloodiest times in that nation's history.

The central figure in this documentary is Abdul Aziz Ghazi, a Taliban ally and ISIS supporter who is the lead cleric at the Red Mosque in the capital city of Islamabad. Aziz believes that the purpose of life is to spread the message of Islam and the teachings of the Qur'an. He wants Pakistan to be governed by a strict interpretation of Shariah law. He and his followers are waging jihad, which they consider to be "holy war," against the government of Pakistan. 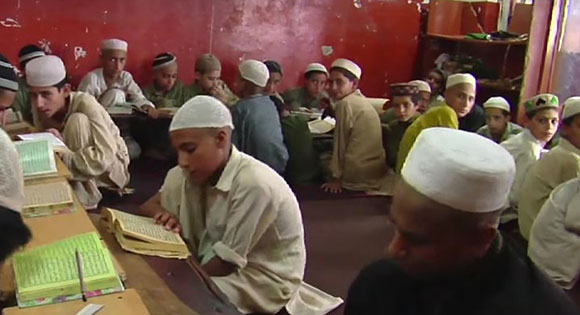 The film explains how this form of radical Islam is being spread through madrassahs, schools where children are given free food, clothing, and shelter. The Red Mosque network has some 10,000 children in training. They spend their days memorizing the Qur'an and are promised the reward of Heaven for themselves and their family members for their efforts; in Heaven, one boy shares, they will get a beautiful crown.

In one of the most chilling scenes, we see a young boy reciting a sermon he has been taught about defending the faith against infidels. He gets so worked up that he shakes as if in a trance. We learn later that the children only memorize the Qur'an; they are not taught what the verses actually mean. Most of them come from poverty-stricken rural areas and are willing to undergo the discipline, beatings, and brainwashing as a necessary strategy for survival. 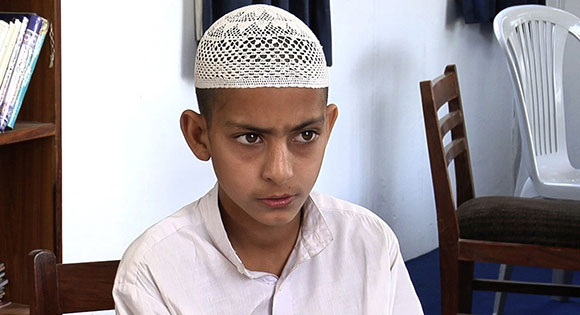 Wherever he goes Aziz is accompanied by heavily armed guards. He believes in righteous violence and advocates war against the infidels. This extremist has had to deal with grief for his father who was killed by Americans and the later deaths of his mother, brother, only son, and 150 students when government forces destroyed the Red Mosque in 2007. Then in 2014 the Taliban murdered 132 children in Peshawar as an act of revenge. This tragedy led to demonstrations in the streets against religious extremism.

Directors Trivedi and Naqvi also present the efforts of a nuclear physicist, Dr. Pervez Hoodbhoy, who preaches Progressive Thought as an alternative to Aziz and his holy war. In a rural village, they introduce us to Tariq, a self-taught activist who has set up a local school which puts the accent on modern education. The filmmakers also profile Talha, a boy who really buys into the religious zeal of those running the madrassah, and Zarina, a girl who fled the madrassah in order to follow her passions and explore her options. 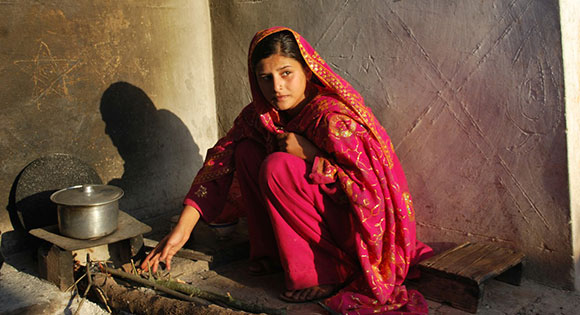 Do not miss Among the Believers, a riveting documentary that helps explain the educational systems and violent changes that are rocking Pakistan.