Directed by James Franco
A band of fruit pickers struggle with hopelessness and keeping their souls alive during a strike.

In Dubious Battle (1936) is considered novelist John Steinbeck's first major work with its philosophical probes of group behavior, social inequality, human rights, sacrifice, and injustice. This film adaptation is directed by James Franco from a screenplay by Matthew Rager. Set in California in 1933, it focuses on a tension-filled strike of underpaid workers against a tyrannical owner who refuses to meet their just demands. 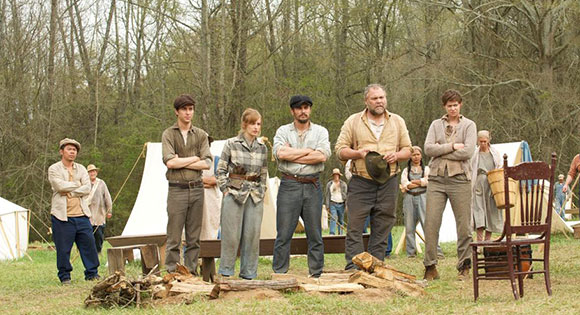 In Dubious Battle is the first of Steinbeck's Dustbowl Trilogy which includes Of Mice and Men and The Grapes of Wrath. These fictional works present a harrowing portrait of American capitalism, patriotism, and vigilante violence which has many contemporary reverberations. Hats off to James Franco for taking on this political drama and assembling such an impressive cast for this rounded treatment of the labor cause.

In the opening scenes Bolton (Robert Duvall), the wealthy and patronizing owner of many profitable orchards, tells a large assembly of fruit pickers that he will pay them a dollar a day. London (Vincent D'Onofrio), the leader of the workers, tells him that they want the three dollars a day he had promised them. The ruthless Bolton pleads that the times are tough and he just can't pay that. 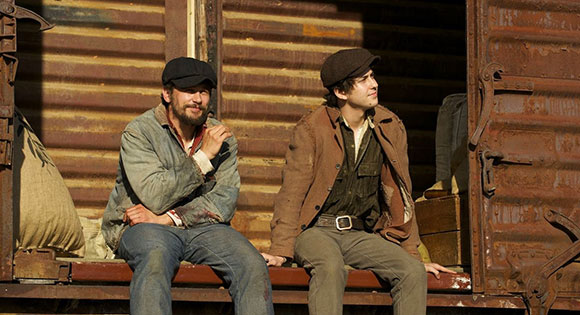 Mac (James Franco) is a Communist activist who has hopes of organizing the fruit workers and setting in motion a strike. Along the way to the orchards, he meets and takes under his wings Jim (Nat Wolff), an ardent young man who is seeking a life of purpose and meaning. Mac's mantra is "use everything" in the service of the cause — such as winning the confidence of the workers by delivering the baby of a young woman (Selena Gomez) even though he has had no medical training. He also sets up an accident of a worker whose leg is broken in a fall from a ladder to dramatize the picker's fate. When Joy (Ed Harris), a comrade, is shot after giving a ranting diatribe against Bolton and his armed guards, Mac uses his death and the arrival of scabs to pick the apples to convince the workers to unite in a strike against their oppressors. He then convinces a local farmer (Sam Shepard) to let the workers reside on his land in exchange for their picking his crop for free. 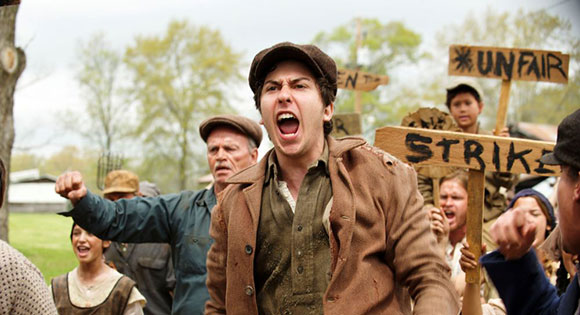 While watching the restlessness of the striking workers, we felt their growing doubts about their ability to defeat Bolton and his many well-armed men. At the heart of In Dubious Battle is the struggle that good leaders like London and Jim have with hopelessness and keeping their souls alive. We also see the staggering difficulties everyone has in staying the course of the strike. It is hard work to form activist communities and to fight the system controlled by the rich and the powerful.

R - some violence and brief sexuality