Directed by David Lowery
A moving and minimalist ghost story that delivers food for thought about travels through time and the art of letting go.

"Be hole, be dust, be dream, be wind
Be night, be dark, be wish, be mind,
Now slip, now slide, now move unseen,
Above, beneath, betwixt, between."

Have you ever felt that you were living in a house haunted by a ghost? These restless spirts may be heard as they open a creaking door or knock an object off a shelf. You might sense them standing beside you in silence drawing your consciousness into a close encounter with the past. In Buddhism, ghosts are often described as "hungry." They are inexplicable characters who seek to keep death close at hand and are very unhappy when we move on and leave them alone in what might turn out to be a moment or an eternity.

David Lowery (Pete's Dragon) is the writer and director of this sad and enchanted horror movie with a moving and minimalist screenplay that refuses to succumb to this genre's usual violent hysterics of blood and gore. Arthur C. Clarke has cautioned us, "Behind every man now alive stand 30 ghosts, for that is the ratio by which the dead outnumber the living." Lowery takes his time preparing us for the appearance of a supernatural being who appears in a bedsheet with eyeholes. 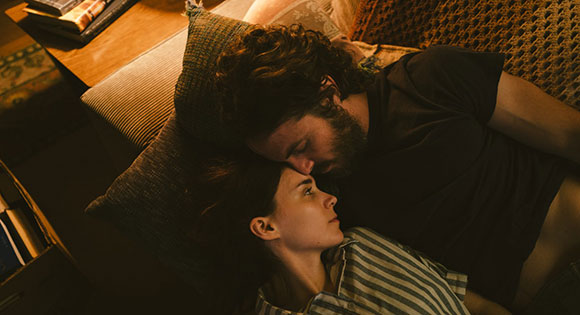 Before the ghost's arrival, we are offered glimpses into the marriage of a nameless musician (Casey Affleck) who lives with a woman (Rooney Mara) in a ranch house which he likes more than she does. We see them awakened one night by a noise from the piano in their living room. Unnerved, they return to bed and snuggle.

Shortly afterward, he is killed in a car crash. She sees his corpse at the morgue and swiftly departs in a daze of disbelief. But he is not gone. We see him arise from the gurney and — clad in his bedsheet — wander down the halls of the hospital. He passes by a bright white light opening there, goes outside, and walk home across the fields.

When she returns to the house, we and the ghost watch as she devours a pie left by a kindly neighbor. In a scene that seems to go on forever, she sits on the floor, stabbing at and scooping up the pie, gulping it down in a mix of anger and craving; we are swept away by her feelings of self-destruction. The mute ghost's emotions abound later when he witnesses a stranger kissing her; he expresses his anger by punching some books off the shelf. 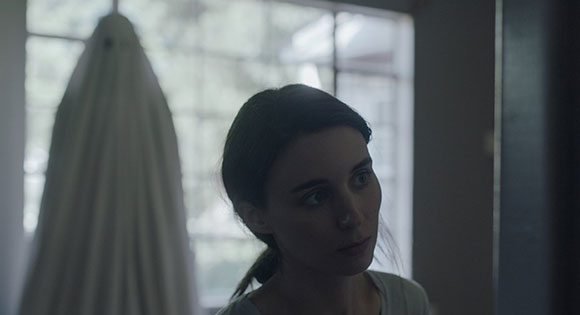 When she packs her things and moves out, he feels abandoned. Gazing out the window, he notices another ghost in the building next door. She says she is waiting for someone but she can't remember who.

Next a Hispanic family moves in; they are happy in the house until he scares them away. The next residents throw a party where one egocentric man delivers a long and depressing speech about the meaninglessness of life in a cruel and indifferent universe. At this point, the film fast-forwards to show us the ghost wandering through a modern office building and flash-backs to frontier times where a family is killed by Indians. 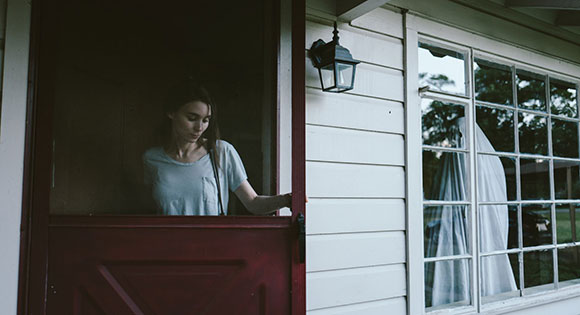 A Ghost Story hits the mark with its subtle and leisurely portrait of the transitions Affleck's ghost goes through in the afterlife. His major challenge is to let go. Toward this end, he repeatedly tries to find out what was written on a note left by his wife in a crack in the wall. Or as one of the ghosts in Charles Dickens' A Christmas Carol puts it:

"It is required of every man that the spirit within him should walk abroad among his fellow-men, and travel far and wide; and, if that spirit goes not forth in life, it is condemned to do so after death."