Directed by Taylor Sheridan
Powerful crime thriller with fresh insights into grief and how to be a good steward of one's pain.

"Grief seems to me like a winter house: guarded, sheltered against an outside world that's expected to be difficult. The windows are small to keep out the cold, and little light gets in. The darkness and warmth make a cozy place to hide, to nurse wounds, to incubate what is not yet ready to be exposed."

— Janet Cedar Spring in Take Up Your Life

Corey Lambert (Jeremy Renner) is a federal wildlife officer who tracks and kills predatory animals at the Wind River Indian Reservation in Wyoming. He lives a solitary life with much of his time given over to grieving for the mysterious murder of his daughter a year ago. He and his Native American wife Wilma (Julia Jones) are separated and that is why he savors every moment he can spend with his young son (Teo Briones).

"No bond in closer union knits to human hearts than fellowship in grief."

— Robert Southey in Joan of Arc and Minor Poe 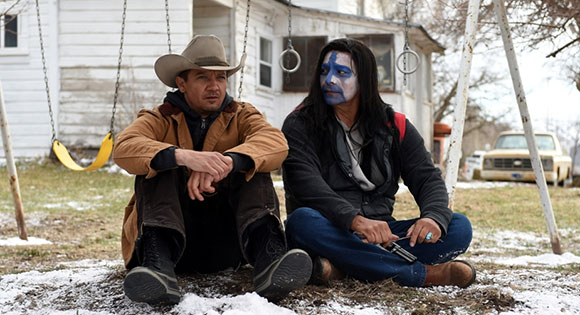 While tracking a mountain lion who has killed a steer, Corey comes across the frozen body of a young woman. He recognizes her as Natalie (Kelsey Asbille), the daughter of a family that lives on the poverty-stricken and desolate reservation. In one of the most poignant and memorable scenes in the film, Corey shares with Natalie's grieving father (Gil Birmingham) what he has learned about grief and being a good steward of one's pain. At a grief seminar he was told good and bad news. The bad news was that he was never going to be the same after the death of his child. The good news was that once he accepted that, he could visit her in his mind. "If you don't live with your pain," he tells his friend, "you'll rob yourself of every memory of her. Living with the pain is the only way to keep her with you." Wise words.

As the winter closes in with deep cold and a snow storm, Corey and the tribal police chief (Graham Greene) welcome Jane Banner (Elizabeth Olsen), an F.B.I. agent sent to investigate because homicide on an Indian reservation is a federal crime. She learns that the dead woman had been raped and had run away from her attackers, covering nearly six miles in the snow before she collapsed. A relatively inexperienced agent for this kind of investigation, Jane asks Corey to help her track the killer.

"Tears are the prayer-beads of all of us, men and women, because they arise from a fullness of the heart."

Wind River is the directorial debut of Taylor Sheridan. It is a very fine crime thriller filled with fresh insights into death, grief, and the ethical challenges of doing the right thing. Sheridan wrote the screenplays for Sicario and Hell or High Water and here once again he explores the power of place upon the psyche. Jeremy Renner gives an Academy Award winning caliber performance as the hunter who squares off against the wilderness and the savagery of men.

Sheridan depicts the macho nature of Lambert's job as a hunter but also reveals the tender and nurturing side of the man in his dealings with his young son, the inexperienced F.B.I agent, and the father and brother of the slain woman.

"Grief is love not wanting to let go"

— Earl A. Grollman in Living With Loss