First They Killed My Father

Directed by Angelina Jolie
A deeply human study of the Cambodian genocide and the brave survival of one little girl.

Director Angelina Jolie's fourth film begins in 1975 in the city of Phenom Pehn, Cambodia, where seven-year old Loung (Sreymoch Sareum) lives with her middle-class family. She has six siblings but is most close to her father (Kompheak Phoeung), a captain in the military police.

On the television, U.S. President Nixon denies that the Americans are at war in Cambodia; Loung glances at the screen and sees carpet bombs destroying her homeland. The entire film is filtered through her senses and mind as she begins a long, gruesome, and terrifying journey to survive what follows the American withdrawal from Vietnam and Cambodia. 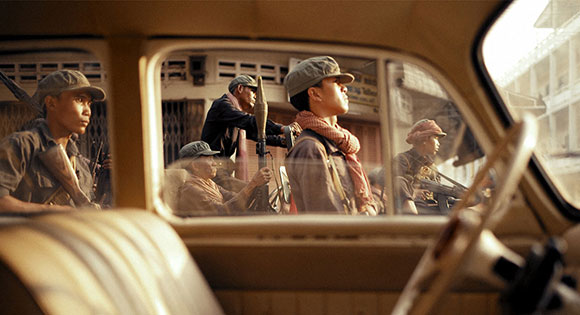 Standing on the balcony of their apartment, Loung reaches up to the sky as a helicopter flies by. Soon her attention turns to the victorious march of the Khmer Rouge into the city. This offshoot of the Vietnam People's Army of North Vietnam has been engaged in a civil war with the Cambodian government. Now the victors, they order all citizens to evacuate the city. Loung's father laments the retreat of the U.S. presence and is gripped with fear of being exposed as a government official and hence an enemy of these zealous conquerors. Through loudspeakers, the Khmer Rouge tell the people they must become loyal Communists, give up all their personal possessions, and contribute to the destruction of the gap between the rich and the poor.

Loung and her family travel first by truck and then on foot into the desolate countryside. Along the way, she bears witness to her own fears and powerlessness. She has a hard time understanding that her comfortable life in Phnom Pehn has been taken away from her. Instead she is always hungry and at one point even devours the meager food supplies of her own family. Loung grows tired of the propaganda speeches of the Khmer Rouge and the brutal treatment of Cambodians whether they are young or old, peasants or professionals, Buddhist monks or those with no religion. 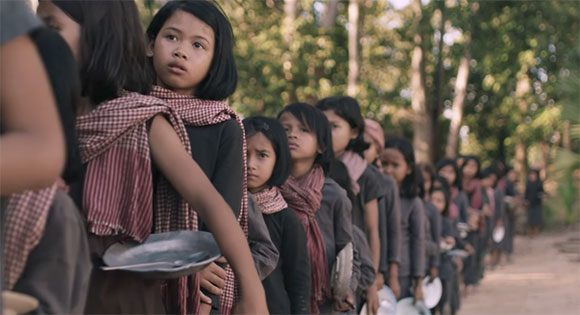 The family ends up in an agricultural work camp and are eventually separated. On her own, Loung is forced to become a dedicated follower of Anghar (the name for the Khmer Rouge leadership) willing to eschew possessions and become proficient in planting land mines, shooting an AK-47, and engaging in hand-to-hand combat with an enemy soldier.

First They Killed My Father is a deeply human study of the Cambodian genocide and the brave survival of one little girl. Angelina Jolie has adapted the film from Loung Ung's memoir and made it into a remarkable child's eye view of the constant ravages and savages of war. We can't remember another film that puts us in the shoes of a child victim; we can feel her fear, understand her confusion, rejoice in her reunions with family members. The cinematography of Anthony Dod Mantle makes the most of this perspective. 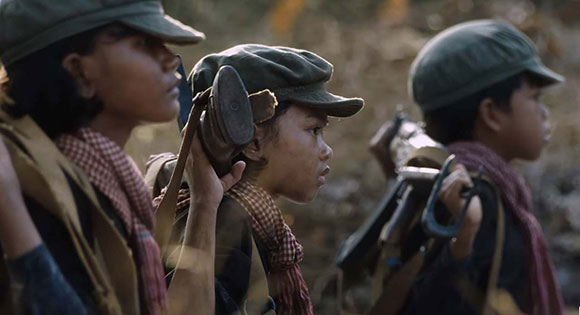 What enables this resilient girl to survive? She improvises ways to move from one setback to another. She seems to be very reliant on her intuition as a guide to choices she makes. Positive and pleasing images and memories of the past are very helpful to her when she is under extreme stress. And, last but not least, she maintains her own secret life which from start to finish is built on her focused ability to pay close attention to whatever shows up in her life.

By the end of the genocidal reign of the Khmer Rouge regime, their cruel experiment in social engineering left more than 2 million Cambodians dead.

Empire of The Sun