Directed by Martin McDonagh
A sturdy depiction of the grace that accompanies turning an enemy into a friend.

Mildred Hayes (Frances McDormand) lives in Ebbing, Missouri, where she works as a clerk in a small gift shop. She is divorced — her ex-husband Charlie (John Hawkes) is shacking up with a woman 30 years younger than he is. Her son Robbie (Lucas Hedges) admires his mother’s independence and anger but, at times, feels it may be too extreme. 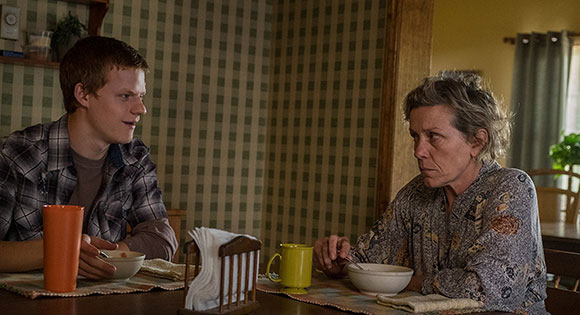 Mildred is angry because she is still in a deep and unsettling state of grief after the murder of her teenage daughter Angela (Kathryn Newton) nine months ago. She has taken $5000 and rented three billboards near her house so she can vent her spleen on the police for not solving this terrible crime.

The billboard messages are “RAPED WHILE DYING,” “AND STILL NO ARRESTS.” “HOW COME, CHIEF WILLOUGHBY?” 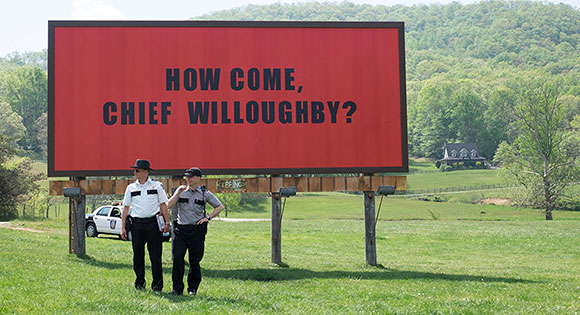 When Willoughby (Woody Harrelson), the sheriff, reads these attacks on his competence, he reviews his investigation of the crime. Meeting with Mildred at her home, he explains that they sought DNA matches from all the suspects they could come up with and found no match. She says he should have pulled blood from every man in the country. Respecting the intensity of her grief and the sharp edges of her pursuit of justice, Willoughby plays his trump card by revealing that he is dying of cancer. Mildred still refuses to take down the billboards.

Writer and director Martin McDonagh (In Bruges) has created a richly spiritual drama that sheds more light on the present American scene than any other film this year. Among the themes touched upon are the unflagging quest for justice, the search for truth, the intensity of grief, the morally reprehensible nature of revenge, the virus of racism, and the suffering and pain of rape and suicide which trickles into the lives of others. 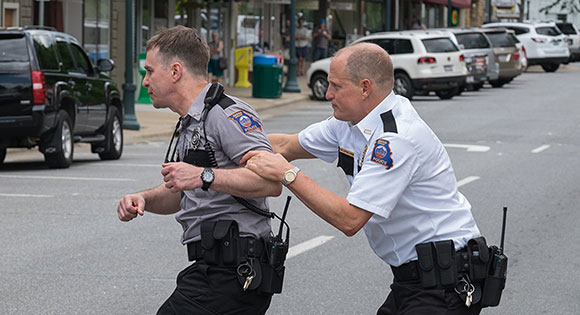 The third central character in McDonagh’s engrossing film is Dixon (Sam Rockwell), a rowdy and racist cop in the Ebbing Police Department. He is a bully who gets in fights wherever he goes. It is spiritually satisfying to witness Dixon’s journey from a man of violence to one searching for justice.

The greatest heroism according to the Abrahamic faiths is “to transform an enemy into a friend, to move from hatred to caring. From suspicion and fear, beyond tolerance, to embrace of the other,” writes Rabbi Amy Eilberg. We watch the ways in which Mildred and Dixon, two angry people, circle around each other shedding sparks as they clash. McDonagh, a gifted playwright, draws out a sensational performance from Frances McDormand whose unrelenting fierceness signals the zeal of her crusade to find her daughter’s killer. As Terry Tempest Williams has written in An Unspoken Hunger: 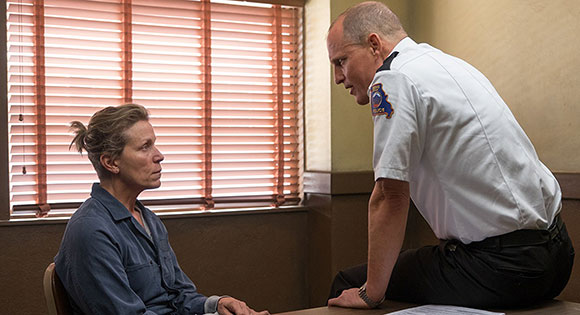 “We are capable of harboring both these responses to life the relentless power of our love. As women connected to the earth, we are nurturing and we are fierce, we are wicked and we are sublime. The full range is ours.”

Sam Rockwell astonishes with his rounded and heart-affecting portrait of the kind of policemen who have been in the headlines for abusing black suspects and being too violent in his treatment of individuals taken into custody. By a strange turn of events, Dixon is set on a path which throws him together with Mildred, a fellow traveler enslaved to anger.

In a world where justice is often shafted and revenge is lauded as a virtue, Three Billboards Outside Ebbing, Missouri ends on a grace note that is redemptive for both of these characters. This is one of the Most Spiritually Literate Films of the Year!

R - violence, language throughout, and some sexual references