Thich Nhat Hanh is a Vietnamese Zen Buddhist monk, poet, scholar, and human rights activist. In this documentary, filmmakers Max Pugh and Marc J. Francis (Black Gold) focus on those who have gathered around him in Plum Village, the monastic community he established in 1982 in southwestern rural France. This soft-voiced Zen master has characterized the sangha as "the masterpiece of the Buddha, a community of caring and sharing, an oasis in the world for healing and transformation." 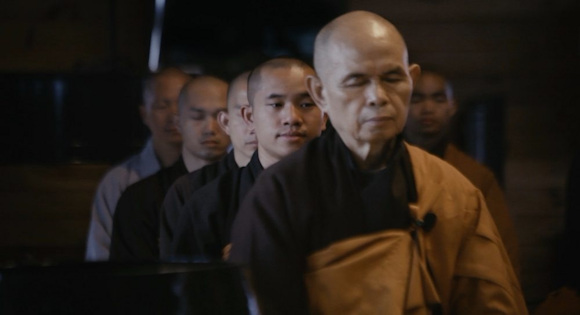 Thich Nhat Hanh, now in his 90s, had a stroke in 2014 and has been slowly recuperating in the United States and France. Before the stroke, he was teaching mindful living around the world, scenes of which are included in the documentary. We also meet some of the other leaders of the Plum Village sangha, who convince us that his teachings are in very good hands and hearts.

Provided with three years of access to the Plum Village community, the documentary directors slow things down to meditative moments caught during walks through the woods, meals during which everyone eats mindfully in silence, and a ritual shaving of the heads of monks. The use of bells at Plum Village as mindfulness keys which calm the body and mind and bring awareness to the breath is accentuated again and again. 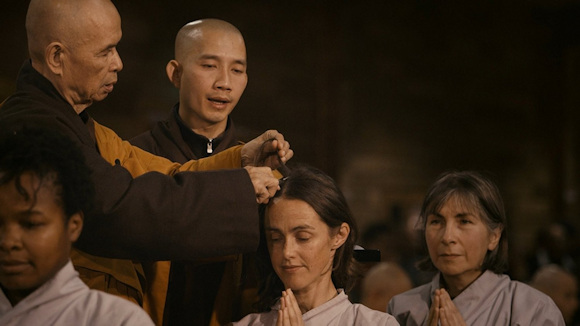 Music plays an important role at Plum Village as a tool for meditation. We were especially moved by the Namo Avalokiteshvara Chant, which we first heard at a New York appearance of the sangha in 2013. The many nature shots in Walk with Me are enhanced by the melodic and soothing score by Germaine Franco.

One of the most surprising treats is hearing actor Benedict Cumberbach read selections from Thich Nhat Hanh's poetry in Fragrant Palm Leaves: Journals 1962-1966.

And perhaps the sweetest thing about this tribute to Thich Nhat Hanh is the time and energy given to reverencing little things. Such as the work of a monk in the kitchen cooking and two girls on a swing with one pushing and the other twirling!