Directed by Ljubomir Stefanov, Tamara Kotevska
A heart-stirring eco-documentary about a nurturing female beekeeper in Macedonia.

In the opening scene of this remarkable documentary, Hatidze Muratova walks through an arid mountainous region in Macedonia and then, despite her old age, climbs high up a stony ridge where she finds behind a rock enclosure some perfect honeycombs. She collects some of the wild bees to bring back to her village, where she has set up hives in stone walls. 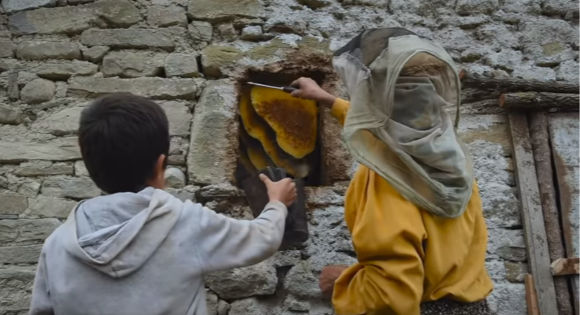 In many parts of the world today, especially in the industrialized West, bee colonies are in serious decline, despite valiant efforts to save them. Among the reasons for this dire development are pesticides, fungal diseases, air pollution, mismanagement of the countryside, and the loss of flowering plants. United Nations Environment Programme Director Achim Steiner has pointed out that of the 100 crop species that provide 90 percent of the world's food, over 70 percent are pollinated by bees.

We obviously need more beekeepers like Hatidze! She serenades her bees with ancient folk songs and makes sure that when she takes any honey, she leaves plenty behind to support the hive. The bees seem to appreciate her thoughtfulness because she can move among them without getting stung. One of the highpoints of her year is when Hatidze goes into the closest town and sells small bottles of honey to enthusiastic merchants who praise its natural qualities and wonderful taste. 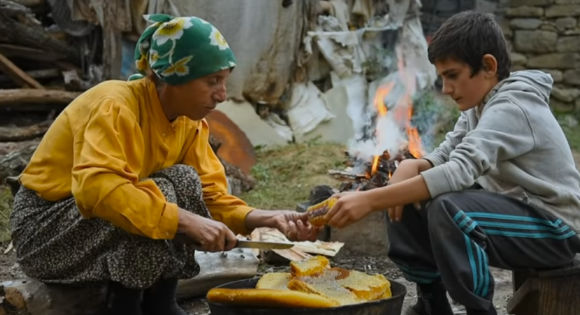 Hatidze has an abundance of nurturing talents which extend equally to the bees and her bedridden 86-year-old partially-blind mother who worries that she has become a burden to her daughter. But their quiet and rhythmic life is interrupted one day when the Sams move in on the neighboring land. They bring with them a trailer, seven noisy and wild children, some chickens, and a herd of equally unruly cows. But as is her nature, the old woman welcomes them, enjoys playing with the children, and tries to teach them about living in harmony with nature.

When Mr. Sam learns how much honey Hatidze can sell in a year, he sees beekeeping as a way to make more money. He buys some hives and enters into a contract to supply a large amount of honey to a dealer. But when he and his sons begin to work with the bees, they do everything wrong. Soon his operation becomes a real threat to Hatidze's. The story reveals the classic clash between exploitation and sustainability. 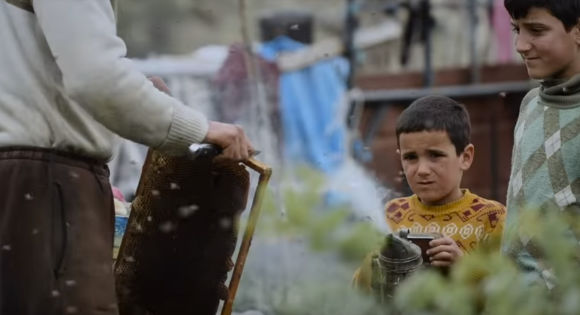 Fortunately, Hatidze is a strong woman from whom we can learn a lot about resilience. Directors Kotevska and Stefanov have created an astonishing documentary about a woman who gives freely of herself to her mother, her pets, and her bees. No wonder Honeyland was the most awarded film at this year's Sundance Festival, taking home the World Cinema Grand Jury Prize, a Special Jury Award for cinematography, and another Special Jury Award for Originality.

A Prayer for the Bees

Queen of the Sun: What Are the Bees Telling Us?

How to Save the Bees: 10 Things You Can Do