Directed by James Gray
A thought-provoking parabolic science fiction film about the transformation of an astronaut hobbled by a wounded feeling function.

Several years ago. a Dutch Company put out an advertisement for a one-way mission to Mars. Those who signed up had to be willing to give up family, friends, and pets. They had to agree to spending 521 days in a cramped space vehicle. How many people do you think signed up, dreaming of being an astronaut and a full-fledged explorer of a distant planet?

This project got 78,000 applicants. Obviously, there are plenty of people seeking the adventure of space travel. And it's likely that even more are game now that we may need to find a home for human beings off Earth, since our species has poisoned the planet and turned it into a death trap.

The opening screen of this sci-fi drama says it is set in the near future, "a time of both hope and conflict." Humans have established colonies on the moon and distant planets, but salvation is not in sight. 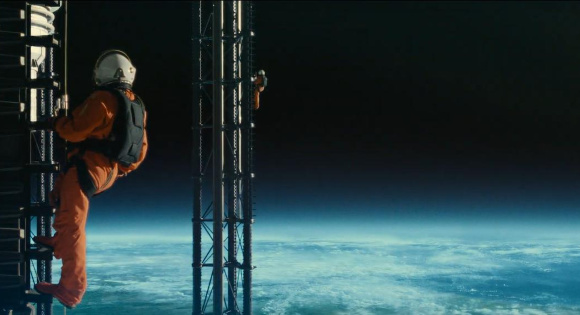 "I have always wanted to be an astronaut," says Roy McBride (Brad Pitt) a Major who has done it all in his job as a space cadet. In the opening moments, he narrowly escapes death when some falling debris from the International Space Antenna sends him careening into the sky; luckily, after a long plunge through space, his parachute works.

Word has it that McBride's heart rate never goes above 80 and that he always manages to stay calm even in the most perilous situations. He is regularly required to prove his mission readiness by describing his emotional state to a computer program, and consistently, he appears to be a master of equanimity. 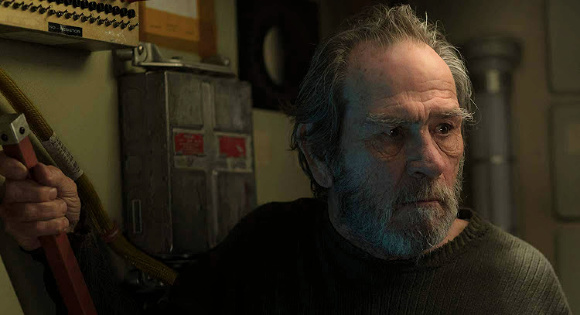 One thing does rattle him, and that is thinking about the whereabouts of his legendary father, H. Clifford McBride (Tommy Lee Jones), who mysteriously disappeared 16 years ago on Neptune. He had gone there with a small group to search for signs of intelligent life in the vast expanses of outer space.

Now Roy is called in by a top-secret government group who need him for a new mission. A series of deadly electronic pulses from deep space have been causing great destruction and many deaths. They believe his father is still alive and has something to do with the pulses, and they need Roy to send his father a message. He accepts this mission at a time when he is feeling especially lonely and isolated. Not only did his father abandon him when he was a young boy, but now his wife (Liv Tyler) has left him. 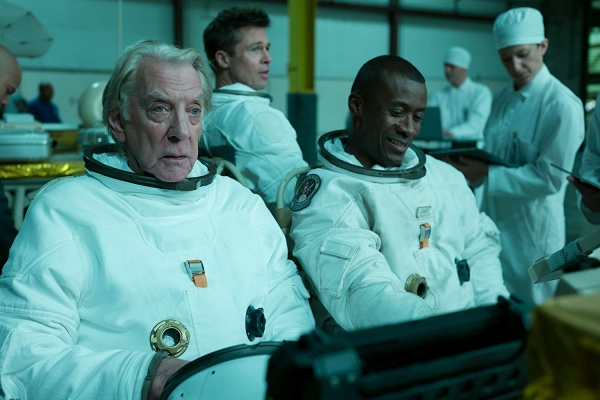 The psychologically rich screenplay by director James Gray and Ethan Gross follows this son on his billion mile journey to find his father -- first to the Moon, then to Mars, and finally to Neptune. For part of his journey, he is accompanied by Colonel Pruitt (Donald Sutherland), a former colleague of his dad, who has been assigned to monitor Roy's emotional state.

In this sci-fi drama, space travel is an expensive, uncomfortable, and dangerous. (The title is from the Latin Per Ardua ad astra" — Through struggle to the stars.") McBride is not pleased with the commercialization of the Moon and the realization that none of the sites there can hold a candle to a glimpse of the beautiful and blue Earth. Plus it's no fun being chased by ruthless Moon pirates.

Mars is not much better as McBride is taken to an underground military dungeon. By this time, he has lost his special secret project status and must make his way to Jupiter on his own with a little help from the administrator (Ruth Negra) of the American outpost. 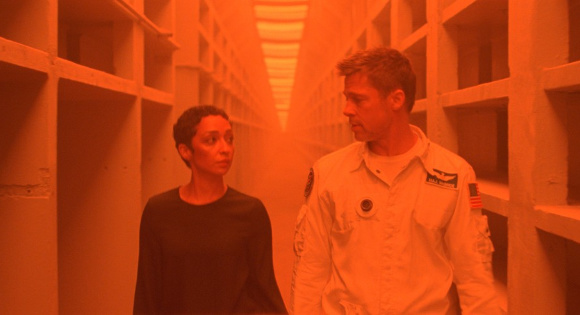 James Gray is a cerebral and immensely creative director who has already made a batch of morally challenging films such as The Immigrant, The Lost City of Z). Although this science fiction thriller is beautiful to watch, thanks to the cinematography of Hoyte Van Hoytema, and fascinating to ponder with its ideas about life in outer space, the use of robots, and the commercialization of the Moon and Mars, the grabber is the ways in which McBride's emotions are transformed in his encounters with the members of the top secret mission committee and with his father. 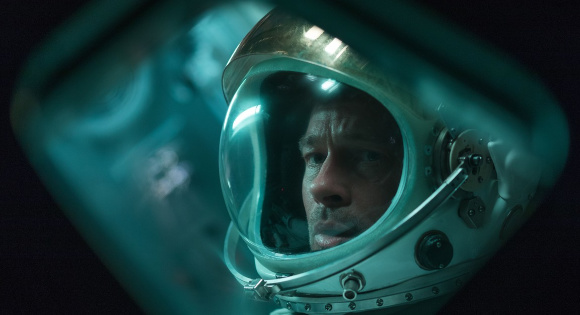 Robert A Johnson, a Jungian analyst, believes that "the wounded feeling function" is probably the most common and painful wound which occurs in the Western world. For most of this parabolic film, McBride is walled-off and isolated from everyone around him. He confesses this and analyzes it in his check-ins. He is lacking a sense of joy and meaning until in circumstances beyond his control, he is turned around and set on new path.

In an interview in Wired, Gray speaks of this turnaround:

"What we're trying to say is, there's nothing out there, nothing is going to save us, and if this is all we've got, what does that mean? If those answers are not out there for us, then human connection is everything."