Directed by Jill Coulter, Todd Wilderman
A magical animated film about the power of friendship and music.

Abominable is the first animated film jointly produced by Dreamworks Animation in the U.S. and Pearl Studio in China. Visually striking with an endearing story, it is sure to please children and adults alike.

Yi (voiced by Chloe Bennet) is still mourning her dad, who has recently died; she doesn't even want to play the violin that he left her. She keeps busy by doing odd jobs, distancing herself from her mother (Michelle Wong) and grandmother (Tsai Chin), hoping to save enough money for a trip her dad had planned for her. Then one evening she discovers a young yeti (aka, an abominable snowman) hiding on the roof of her apartment building. While she had thought yetis are just mythical creatures, this one is very definitely alive, scared, and in need of her help. After Yi notices his gaze fixed on a billboard of Mt. Everest, she decides to take him home. Two friends, young basketball-obsessed Peng (Albrert Tsai) and his cousin, the charming Jin (Tenzing Norgay Trainor), go along with her. They name the yeti after their destination, Everest. 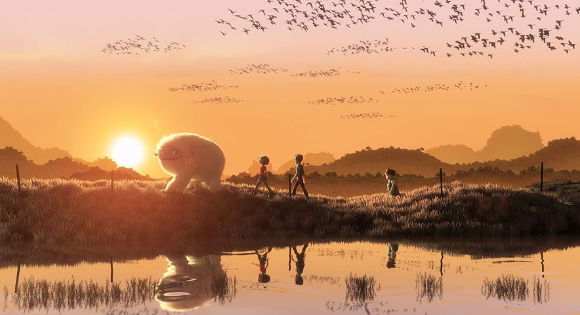 Their journey takes them across China through waterways, the Mohave desert, and into the high mountains. If the travel isn't enough of a challenge, they have to protect Everest from a rich businessman (Eddie Izzard), who was humiliated by a yeti years earlier and is now determined to possess one. A scientist (Sarah Paulson) pretends to only be interested in the yeti as an endangered species, but she has other more nefarious motives behind her pursuit.

The youngsters and their charge quickly establish a deep bond, which then triggers some of Everest's magical talents. During these moments, the animation amazes with vivid landscapes of yellows and greens and elements that transform with mystical shadings. 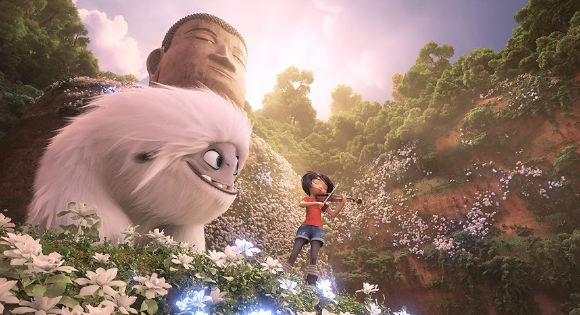 But it is the music that helps this film touch the heart. Composer Rupert Gregson Williams' score abounds with soaring strings, and when Yi finally picks up her violin and plays at the foot of a giant Buddha, we are transported by the love of her father, her companions, nature, and herself that she expresses. And don't miss the use of Coldplay's "Fix It" at just the right moment.