One Night in Miami

Directed by Regina King
A fictional recreation of a gathering of four Black leaders and their sometimes heated conversation about their goals and aspirations.

Three of the most famous Black men in the United States, each immensely talented in his own way, have come together to watch their brash and boisterous friend Cassius Clay fight Sonny Liston for the World Heavyweight Championship. The boxing match took place on February 25, 1964, and Clay and his friends did meet up that evening. The film's screenplay by Kemp Powers is based upon his play of the same title. Regina King (Watchmen, If Beale Street Could Talk) in her directorial debut helms this poignant, touching, and compelling drama.

The four Black men who gather that night have brought to Miami all the complicated aspirations, anger, frustrations, and dreams of African-Americans across the country. In the midst of the Civil Rights movement, witnesses themselves to the effects of racism and violence, these men are icons in transition. Two of them, soul singer Sam Cooke (Leslie Odom Jr.) and football legend Jim Brown (Aldis Hodge), are trying to forge new entrepreneurial success with crossover audiences. The other two, Nation of Islam leader Malcolm X (Kingsley Ben-Adir) and Cassius Clay (Eli Goree), are exploring the potential impact of their Muslim faith. 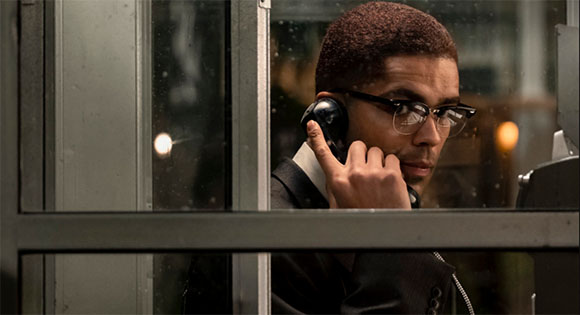 After Clay's surprising victory in the ring, the four gather in a small room at the Hampton House motel to celebrate. Although well aware of their young friend's charismatic spunk, Cooke and Brown are taken aback when he announces that he is joining the Nation of Islam and will change his name to Muhammad Ali.

Through flashbacks, the film shows us what these men have experienced, despite their accomplishments, in a racist society. Jim Brown goes to visit a prominent neighbor in Georgia who admits to being a huge fan of the football star but informs him that he won't invite him inside because his family does not allow Black people in the house. Soul singer Sam Cook, already very popular with radio and Black audiences, gets his first gig at New York's Copacabana club; he sings "Tammy" and the white audience barely acknowledged his presence.

At the celebration at the motel, Malcolm X is at the center of the dialogue which ensues. At one point he says, "We are fighting for our lives." He criticizes Cooke for not writing songs about the movement. The verbal exchanges between Malcolm and Cooke get more heated, and hurtful things are said. It always is harrowing to be in the presence of someone who is trying very hard to turn you around. Pushed against the wall by Malcolm X's zealotry, Cooke says in defense of his career: "The only color that matters in California is green." 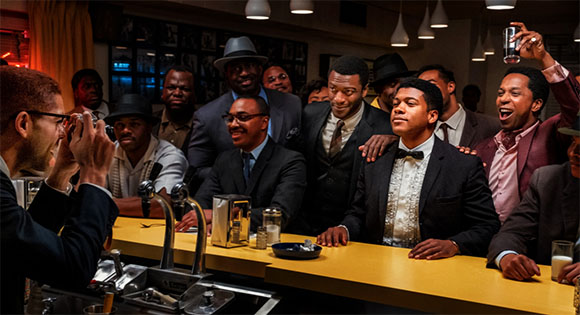 One Night in Miami imagines what each of these icons from sports, music, and activism brings to the dialogue about Black identity, ideals, and goals. Differences surface but underneath the back-and-forth banter, we sense tremendous mutual respect. Their conversation covers a wide range of opinions about fame and the obligations of Black leaders, what it means to be free, and where and when change is going to come.

These conversations are still going on today, making this film a great discussion starter for Black people and those seeking to dialogue with them.