Directed by David Fincher
A look at the influence of power and money in 1930s Hollywood through the eyes of a talented but blocked and addicted writer.

Nearly every year, Hollywood cranks out drama about narcissism, the amorality of the rich and the powerful, and the urge to shape the ideas and the habits of the American public. For some reason (perhaps a sign of that very narcissism being critiqued), these movies often get nominated for Academy Awards. 2020's candidate in this vein is Mank, which garnered 10 Oscar nominations, including ones for Best Picture, Best Director, Best Actor, Best Supporting Actress, and Cinematography.

Mank is an agitated, rowdy, and unruly look at the life of Herman Mankiewicz (Gary Oldman) who is experiencing a mid-life crisis as a screenplay writer in Hollywood. During the 1930s, he was viewed as a "court jester," known for his sharp wit as he spun off barbs and zingers at random. But now at the end of the decade, he has writer's block while lying in bed with a broken leg at a ranch in the desert. He comes face-to-face with his immense capacity for self-destruction. Witness his addiction to Scotch and all the days spent in a drunken stupor. At one point, he says: "I should have done something by now." Helping to look after him is his efficient secretary (Lily Collins). 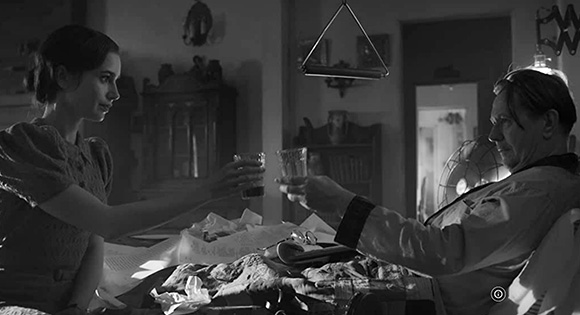 The project weighing heavily on Mank's energy and creativity is the screenplay for "Citizen Kane," the movie to be directed by and starring Hollywood's new wunderkind Orson Welles (Tom Burke). He has decided to have the story revolve around the notorious life and sinister power of a newspaper tycoon very similar to William Randolph Hearst (Charles Dance). Despite his acerbic criticism of this very wealthy man, Mank has attended many of his lavish parties. He also has established a friendship with actress Marion Davies (Amanda Seyfried), Hearst's young mistress. 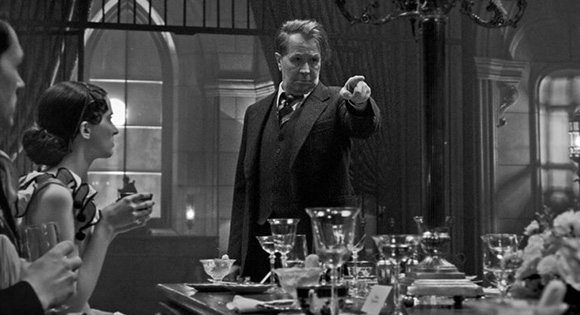 In an article in The New York Times by Jonah Weiner, David Fincher states that Mank is the movie he's been waiting all his career to make. This director has amassed for himself an impressive collection of films which shine a light on greed, selfishness, power, violence, and competition: including Fight Club, Gone Girl, The Social Network, and The Curious Case of Benjamin Button.

Fincher uses the Hollywood milieu in the 1930s to explore the amorality of studio chiefs and their underlings who crank out stupid movies for audiences they despise as dumb. Among those who are revealed to be most hypocritical and greedy are Louis B. Mayer (Arliss Howard) and Irving Thalberg (Ferdinand Kingsley).

With bold strokes of creativity, Fincher and screenplay writer Jack Fincher depict the culture war at the end of the Great Depression when novelist Upton Sinclair is running for governor of California. His political ideal of helping the millions of poor and unemployed citizens is attacked by his Republican opponent as nothing more than fascist and socialist propaganda. Most of the Hollywood community contribute large amounts of money to defeat Sinclair. Among Mank's many revelations are reasons why this was so.