Directed by Jon M. Chu
A vibrant musical about seeking your dreams, finding your home, and living with zeal.

"Every great dream begins with a dreamer. Always remember, you have within you the strength, the patience, and the passion to reach for the stars to change the world."
-- Harriet Tubman, African-American abolitionist

In the Heights is a vibrant, energetic, and emotionally rich big screen adaptation of the Broadway show, winner of the 2008 Tony Award for Best Musical. It is propelled by freestyle rap, salsa, meringue, and Spanish-infused music with lyrics by Lin-Manuel Miranda and a book by Quiara Algria Hudes. Other inspiring and entertaining aspects of this movie are massive and dynamic dance numbers, including an awesome sequence in a large swimming pool, choreographed by Christopher Scott and creative production design by Nelson Coates. The whole enterprise is masterfully directed by Jon M. Chu. 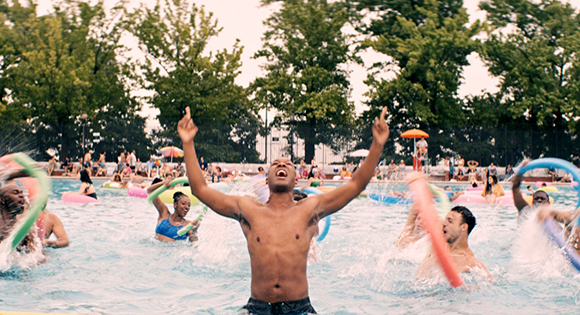 The story is set over a three-day period as the residents of the largely Dominican neighborhood in Washington Heights, Queens, New York, are enduring a scorching summer heat wave and an electricity blackout. The oppressive weather weighs heavily on the first- and second-generation immigrants of this Latinx community. Many of the older ones would love to return to the Dominican Republic (DR) while their younger relatives would like to make the Heights their permanent home.

We immediately learn that these are dreamers. Usnavi (Anthony Ramos), who runs a bodega selling Lottery tickets, candies, drinks, and groceries, has what he calls his "suenito" -- little dream. He wants to go back to the DR and renovate his dead father's beach bar. He wants Abuela Claudia (Olga Merediz), the matriarch of the community, and his cousin Sonny (Gregory Diaz IV) to come with him. But he's also very drawn to Vanessa (Melissa Barrera). She has her own dream, to move to downtown Manhattan to pursue a career as a dress designer. 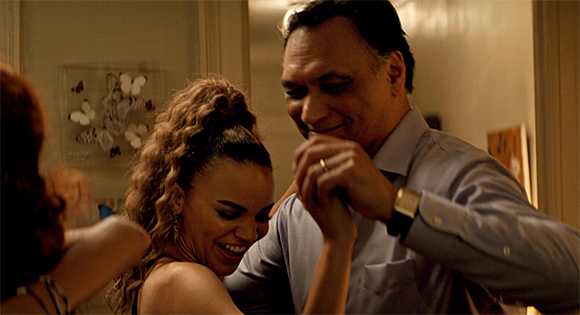 Dreams, we soon learn, do not always turn out the way the community expects them to. That's the experience of Nina (Leslie Grace), the popular girl and academic star in high school who got a scholarship to Stanford. But after experiencing discrimination in California, she has come home to the neighborhood and reconnected with Benny (Corey Hawkins), her old boyfriend. In two scenes, she pauses just to appreciatively listen to the sounds of "my block." She's afraid other Washington Heights people, including her father (Jimmy Smits) will be disappointed in her.

"There is no vocabulary
For love within a family, love that's lived in
But not looked at, love within the light of which
all else is seen."
-- T. S. Eliot in The Elder Statesman

In the Heights charts the vocabulary of love in various families and among a diverse group of neighbors. The longing to belong is strong here. Screenplay writer Quiara Akegra Hudes has said of this theme:

"This isn't about a hero or a protagonist, it's about what happens when a community holds hands together and life kind of pushes those hands apart. It's about these blocks and these living rooms where you go after school and do your homework or play bingo during a blackout. It's all here."

Little things matter in the barrio where these characters face unexpected situations such as a power outage, the high cost of college, the hope stirred up by a high paying lottery ticket, the yearning to be free of racial discrimination, the disappointments of parents who want what they think is best for their children, the escape from the heat at a large public swimming pool, and the playfulness of women gossiping and talking about sex at a local salon. 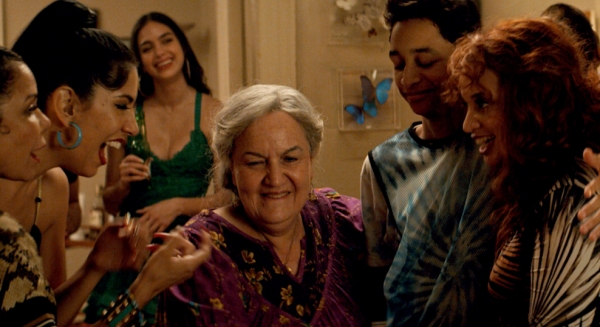 Perhaps the strongest advocate for the community is Abuela Claudia who teaches what in spirituality circles is known as the "little way." It's the little things that tell the world we are not invisible, she explains, and so each of us must assert our dignity in little ways. "She sang the praises of things we ignore," adds Usnavi. (See the teaching scene linked off this review.)

At the end of this film, you will realize that the characters have shown us what it means to incarnate this quote from writer Maya Angelou:

"My mission in this life is not merely to survive, but to thrive; and to do so with some passion, some compassion, some humor, and some style."

Read our reflections on Gratitude in In the Heights