Directed by Christopher Ashley
An inspiring musical about the transformative power of hospitality and kindness.

We need more citizens of the world
who are united by hospitality,
open to new ideas, tolerant of strangers,
and willing to face the mystery of the human adventure.
-- Frederic and Mary Ann Brussat

There is a German proverb which has been used to describe life in the U.S.A. It goes: "In America an hour is forty minutes."

We thought this proverb very telling when we were seated on a crowded airline that was being held on the runway because of bad weather on our flight path. Fifteen minutes passed, then thirty. With almost every seat occupied, the passengers were already primed for irritability. As the delay increased they progressed from being restless to downright angry. Some cursed. Others threatened to sue the airline.

We thought of this experience again while watching this musical about passengers stuck on board an airplane and then in a strange airport on September 11, 2001. Great patience is required, to say the least.

Come From Away is a 2017 Broadway musical. The production was shut down by the pandemic, but the cast reunited in June 2021 to film the show in front of a live audience. It was the first time an audience had been back in the theater after a difficult year. That reality adds to the poignancy of this presentation. 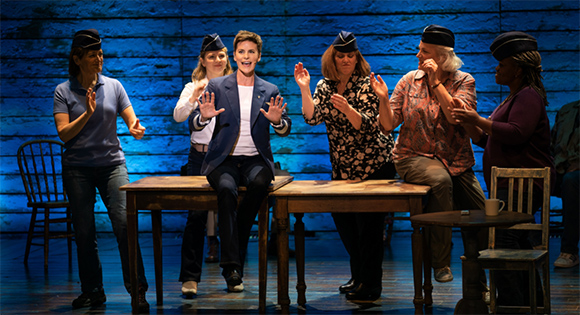 It's the morning of September 11, and American airspace has just been closed to commercial flights. Inbound flights have been diverted to Gander Airport in Newfoundland, a large facility on the far eastern edge of Canada that used to be a major refueling stop. Thirty-eight planes land in Gander, depositing some 7,000 frightened, angry, and confused passengers.

Hours pass before they can deplane, during which time they don't know what has happened. The passengers fret about being confined inside. They drink up the liquor on board and then complain about each other. When they finally exit the planes and find out about the terrorist attacks in the U.S., they line up at phone booths to call family and friends. 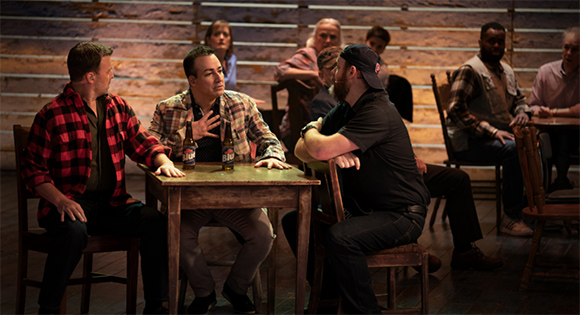 Meanwhile, the colorful citizens of the tiny town of Gander prepare to offer hospitality to the stranded strangers. They find houses and schools where they can stay, round up blankets and clothing, and stock up supplies in the local stores. The townsfolk bring in casseroles, try to provide some entertainment, and listen to the visitors' concerns.
Christopher Ashley, who won a Tony in 2017 for Best Direction of a Musical for this play, does a masterful job humanizing all the colorful characters as the same cast plays both the visitors and the townsfolk.

The varied characters are inspired by real people and include an pragmatic mayor, a gay couple, a African American woman worried about her firefighter son in New York, an African man who buoyed by the community at Gander, two lonely middle-agers who fall in love, and a female pilot who proves to be a great caretaker.

Come From Away is an inspiring musical about the healing and transformative power of hospitality. It is a beautiful illustration of these two quotes:

Hospitality is the way we come out of ourselves.
It is the first step toward dismantling the barriers of the world.
-- Joan Chittister

Kindness is sometimes viewed as one of the effete virtues lacking in charisma or clout. And yet it encompasses meaningful acts of love,
words of encouragement, various kinds of etiquette, and reverberations beyond our ken.
-- Frederic and Mary Ann Brussat