What Do We See When We Look at the Sky?

Directed by Alexandre Koberidze
A quietly affecting call for all of us to pay closer attention to the world around us.

Despite its title, Alexandre Koberidze’s gentle subversive What Do We See When We Look at the Sky? doesn’t really focus much on simply looking up. The film’s more all-encompassing question might be better represented by cutting off the last three words. Koberidze wants his audience to look at everything, not just the things that demand our attention or immediately catch our eye, but everything we probably spend most of our days ignoring.

At the center of the plot is the star-crossed story of Lisa (first played by Irina Chelidze) and Giorgi (first played by Giorgi Amroladze), two strangers who happen upon one another twice in one day in the Georgian city of Kuitasi and decide that fate (in the form of a dropped book) must be nudging them to meet for a date. Unfortunately, Lisa is being watched by an “evil eye” and the two would-be lovers wake up the following morning with their appearances completely changed so they are unrecognizable to one another. They’re now played by Ani Karseladze and Giorgi Bochorishvili, and they’ve both lost their acquired expertise, medicine for pharmacist Lisa and soccer for league player Giorgi. 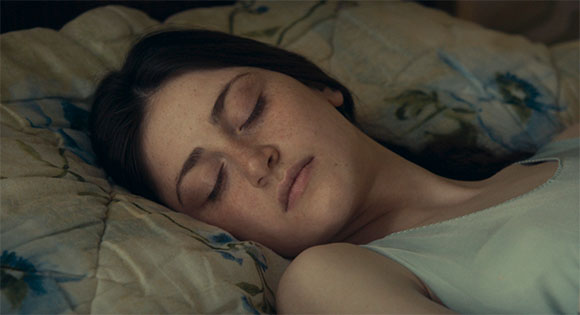 From here, these two proceed to live out a strange sort of fairy tale, winding up in two boring jobs while they work just feet away from one another. As if the irony weren’t thick enough, voiceover narration (delivered flatly by the director himself) accompanies their every move, as if they are characters in a storybook, complete with such whimsical accoutrement as a talking weed, a talking security camera, and a talking rain gutter. Absurdity abounds as the extremely mundane is juxtaposed with the absolutely magical.

Lisa and Giorgi remain mostly in the middle of the action, but soon What Do We See When We Look at the Sky? reveals itself to be something even more daringly delicate than a fanciful fable. Koberidze begins to focus on long takes of nature, of animals, of faces, especially those of children. With each lingering shot, he invites viewers to pay attention to the absolutely astonishing beauty present in every interaction, every creature, every smile and raised eyebrow.

In fact, as the film turns into more of a meditative tone poem than a properly propulsive narrative, Koberidze becomes even more playful. He nudges his witnesses to focus even more deeply when they might just want to let their minds wander, to seek new discoveries by staring at scenes they think they’ve seen before. And all along, the narration reminds us that we, too, might be living in a dreamy fantasy, no matter how prosaic our existence might feel. 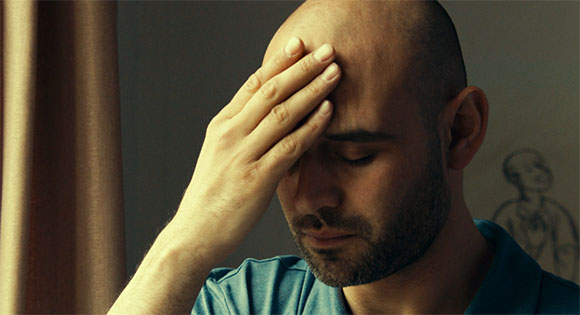 By the time attention comes back around to Lisa and Giorgi’s predicament and their story climaxes in a lovely moment of surprising revelation, What Do We See When We Look at the Sky? has become something far larger than a tale of two people. It has magnified the rippling rhythms of an entire city, an entire country, an entire world. Every element of the film’s environment has been suffused with unexpectedly beautiful soul. Paint on the backs of soccer players shimmers with an incandescence that harmonizes perfectly with shining sunbeams. Soccer balls hum with an eager energy that adds to the everyday cacophony of lives being lived. All around, organic miracles mix with human wonders, a symphony of gorgeous fodder for the imagination.

Koberidze simply wants us to ask ourselves and one another what we see when we stop, really stop, to truly look, take in, and transform? And it’s not merely a question about eyesight. It’s a question for the heart, daring all to recognize the call of a world that has so much more to offer than we typically take the time to see.