Directed by Spike Lee
Diligently and respectfully tracks both the highs and the lows in the spiritual journey of one of America's most important black leaders.

"The journey of spiritual growth requires courage and initiative and independence of thought and action. While the words of the prophets and the assistance of grace are available, the journey must still be traveled alone. No teacher can carry you there."

In Malcolm X, Spike Lee uses the medium of film to track the spiritual journey of this controversial and charismatic black Muslim teacher, preacher, and activist. In the 1940s, Malcolm Little (Denzel Washington) arrives in Boston hungry to experience the adventures awaiting him on the city's street and in its dance halls. He falls under the influence of Shorty (Spike Lee), a street hustler. Then in New York, he is hired by Archie (Delroy Lindo), a West Indian underworld kingpin, and becomes a numbers runner.

At this stage in his journey, Malcolm's flesh is willing for new challenges but his spirit is weak. He also seems to need the affirmation and counsel of older men to bolster his confidence. Archie fills the bill by ilitiating him into the wanton world of booze, drugs, and easy women. Malcolm learns quickly but eventually gets on the wrong side of Archie and has to flee the city. In Boston, he reverts to petty burglary, is caught, and ends up in prison.

The second phase of Malcolm's spiritual journey begins when he meets Baines (Albert Hall), a black Muslim inmate who converts him. He comes to see his enslavement to white values and lack of pride in his African heritage. With great zeal he adopts the strict code of conduct of his new religion which forbids drinking, smoking, eating pork, or sexual license. He also changes his name to Malcolm X, signifying his unknown African identity which had been destroyed by slavery.

Once released from prison, Malcolm X dedicates himself to proclaiming the ideas and values of the Honorable Elijah Muhammad (Al Freeman, Jr.), leader of the Nation of Islam. He marries Sister Betty (Angela Bassett) and throws himself wholeheartedly into his ministry.

Malcolm X's gifts as a preacher come across in his vitriolic expose of the myths and hypocrisies of racism in America. He critiques white America for the violence it has perpetrated against blacks. He asserts the fundamental right of all people to be treated with dignity. He hammers home the importance of Afro-American pride and the quest for justice. However, when the press gives more coverage to Malcolm X than to Elijah Muhammad, members of the leader's inner circle convince him to cut his fiery protege off. When Malcolm discovers that his spiritual mentor has feet of clay, he breaks from the movement.

On the final leg of his spiritual journey, Malcolm X makes a sacred pilgrimage to Mecca. There on his own, without any outside teachers, his spirit is strengthened. He meets Muslims of all colors and senses the global dimensions of the struggle for justice. He also acknowledges his willingness to work with other civil rights leaders and even whites to create a better life for his people.

But returning to America to set up his own mosque, Malcolm X is isolated from nearly everyone. The whites fear him for his reputation as a hatemonger and black Muslims see him as a cursed Judas figure. Before Malcolm can spin out his new hopes and dreams for his ministry, he is assassinated by some vengeful black Muslims. The year is 1965; Malcolm X is 39.

Director Spike Lee convincingly tracks both the low and the high roads of Malcolm X's spiritual journey. The film is carried by the quiet intensity of Denzel Washington, who gives an Academy Award-caliber performance. The other performances convincingly mirror the man's charisma and its positive and negative results. 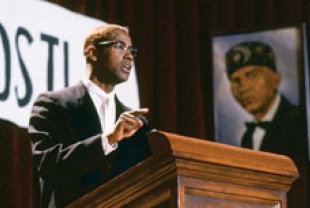 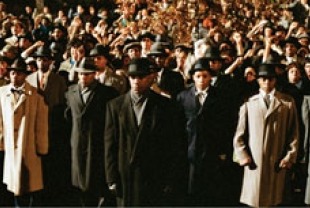