Directed by Jim Sheridan
A soulful and buoyant portrait of a poverty stricken Irish family's winning battle to move beyond the wrenching and chaotic emotions of grief into a new life in Manhattan.

"Grief discriminates against no one," Stephanie Ericsson has written. "It kills. Maims. And cripples. It is the ashes from which the phoenix rises. And the mettle of rebirth. It returns life to the living dead. It teaches that there is nothing absolutely true or untrue. It assures the living that we know nothing for certain. It humbles. It shrouds. It blackens. It enlightens. Grief will make a new person out of you, if it doesn't kill you in the making."

In America is one of the best films of the year with its vivid and compelling portrait of the ways four members of an Irish family cope with the contradictory, wrenching, and chaotic emotions of grief. Jim Sheridan, the director of My Left Foot and In the Name of the Father, wrote the largely autobiographical screenplay with his daughters Naomi and Kirsten. It is a tour de force depiction of the soulfulness, imagination, and wonder that is needed to keep standing after being decked by a tidal wave of grief. To move beyond this powerful and unsettling emotion, we have to have the support of others who love us. It is, as Sheridan's drama reveals, a nightmarish process that can be transformative.

Irish emigres Johnny (Paddy Considine) and Sarah (Samantha Morton) enter America from Canada. They have two daughters, ten-year old Christy (Sarah Bolger), who is never without her camcorder, and Ariel (Emma Bolger), her younger sister who is very outgoing. Although their physical baggage is so slight that it all fits in their station wagon, the emotional baggage this family is carrying is immense. They are still mourning the accidental death of the youngest child, Frankie, who also had a brain tumor. In the voice-over during the opening scenes, Christy notes, "There are some things you should wish for and some you shouldn't." Frankie told her she had three wishes. She is finding it hard to discern what to do with them. There are so many things that need fixing and so many important challenges facing the family.

They move into a top floor apartment in a rundown tenement populated by junkies, drag queens, and other poverty stricken people. Although Johnny and Sarah see only a room filled with dust and debris, their buoyant daughters think it is a little paradise; they even want to keep the pigeons that are roosting there. Johnny, an actor, begins to go to auditions while Sarah, a teacher, can only find employment in a nearby ice cream parlor called Heaven.

The family is stunned by the heat and humidity in the city. When the temperature soars to 102 degrees, Johnny finds a used air conditioner which he hauls up to the top floor only to find out that he needs a special plug for the wall. After being humiliated at the store because he doesn't have enough change to purchase the plug, he finally gets one, but the air conditioner soon blows a fuse and shuts down the power in the whole building. The family escapes to the movies where they see Steven Spielberg's E.T.

Johnny's shame over their poverty comes to the fore in another telling scene. At an amusement park, he gambles with their rent money trying to win an E.T. doll for Ariel. Christy, seeing her father's anxiety and need to prove himself to them, expends one of her wishes, and he wins the prize.

The girls have their moments of embarrassment when they are the only ones in their Catholic school wearing homemade costumes for Halloween. Back at the tenement, they go trick or treating to each door. When they reach the one that says "STAY AWAY" and is inhabited by the African-American they call "the man who screams," they are surprised when he answers the door and invites them in. Mateo (Djimon Hounsou) gives the two girls a jar filled with change. He is a lonely and sick man whose refrigerator is filled with medicines. Later joining them for dinner, he proves himself to be a lucky man as well, pulling out of his Irish meal a coin that means he will be rich and a ring that proves he will marry. Ariel, who has an immediate connection with him, says "You're magic." And she is right on target with this intuitive response.

When Sarah learns that she is pregnant, Johnny doesn't know how to respond. Frankie's death haunts him every day, and he is not sure he is ready for another child. He is really unhinged when the doctor tells them that there could be life-threatening complications with the birth. In one of the many emotionally riveting scenes in the drama, Ariel tells him that he is not her father. He doesn't play with them like he used to and when he prays with them, he refuses to kneel. Sarah implores her husband to use his talents as an actor for the kids' sake: "Make believe you're happy!"

One of the reasons why In America stands out from so many other family films is that the performances of the lead characters are so honest, natural, and vibrant. Paddy Considine catches all the tense, hopeful, and fearful complexities of a grieving father who feels unequal to the challenges of taking care of his family and of shedding the guilt he feels over his child's death. Samantha Morton's Sarah is a worn-out and exhausted woman who swings back and forth between depression and moments of elation as she tries to fulfill her obligations as a mother, a wife, and a breadwinner. Sarah Bolger shines as the intuitive and sensitive Christy who at one point says to her father "I've been carrying this family on my back for a year." Emma Bolger as the gregarious Ariel, who always has a smile on her face, demonstrates the soulfulness of children whose wonder and imagination can carry them through a sea of troubles and difficulties. Finally, in the pivotal role of Mateo, Djimon Hounsou (Amistad) turns in a magical and uplifting performance as a soul friend whose love and generosity arrive at just the right moment in the lives of his beleaguered Irish neighbors.

In America is a totally involving movie — you will find yourself aching and hoping and celebrating with these characters in almost every scene. It gets all its emotions just right. By coping with their grief, each in his or her own way, Johnny, Sarah, Christy, and Ariel rise like phoenixes out of the ashes.

The DVD has an audio commentary by director Jim Sheridan, which is better than most such efforts because the film is autobiographical; he talks about the death of his brother and his own experiences moving to New York with his wife and two girls. There are also some deleted scenes with commentary an alternate ending, and a making-of featurette with some more glimpses of the delightful Bolger sisters. 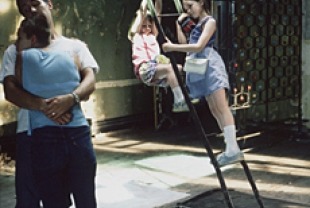