Directed by Alexander Payne
A buddy movie that is a delight from start to finish: it offers a round-trip ticket to the rewards of friendship and the follies and frustrations of middle-age.

Miles (Paul Giamatti) is the kind of forgetful friend who always shows up late for an appointment. He's the kind of rumpled, distracted fellow who has a hard time relating to women. No wonder he's still suffering from the humiliation of a divorce two years ago. Miles teaches school but has a grander view of himself as a novelist. The one thing that he does know a lot about is wine and that is why he is taking his best friend, Jack (Thomas Haden Church), on a week-long tour of California's wine country. It is his buddy's last fling before his upcoming wedding to Victoria (Jessica Hecht).

Jack is the kind of handsome fellow who finds it easy to flirt with women. He's an actor who made his mark in television but has recently only been doing commercials. Jack is apprehensive about settling down and desperately wants to get laid again before he gives up his freedom. Miles and Jack are very different men and yet they have a friendship that goes back to the time when they were roommates in college. Their jaunt into wine country will test their friendship and the ways in which they see themselves and women.

The first stop on the trip is unscheduled: a visit with Miles's mother (Marylouise Burke). He wants to give her a surprise on her birthday. She is very much taken with Jack and can’t get over how lucky her son is to have him as a friend. Miles smiles in agreement, then secretly stops in her bedroom to steal some cash from her hiding place. In Solvang, California, they decide to have dinner at the Hitching Post, one of Miles's favorite spots for wine-tasting. He teaches Jack the proper way to sample the wine, taking in its aroma. But his buddy's eyes light up when he catches sight of Maya (Virginia Madsen), a waitress who knows Miles. Pretty soon he's busy advising his friend to seduce her.

Miles, who's shy and not very self-confident in this department of life, is uneasy with the suggestion. The next day at a winery, Jack is very much taken with Stephanie (Sandra On), a sexy pourer who seems to be in the mood for fun. When Jack finds out that she knows Maya, the four of them go out together. But Miles has fallen into a funk after learning that his ex-wife has remarried and intends to show up at the wedding. Back at Stephanie's place, Miles and Maya share their mutual passion for wine. She talks about the living quality of wine and her admiration for all the toil and the attention that goes into its preparation. Miles fumbles an opportunity to spend the rest of the evening with her and they go their separate ways. But he does manage to give her a copy of his lengthy novel to read.

Imagine his surprise when Jack tells him that he's madly in love with Stephanie. While they get together on her day off, Miles is forced to entertain himself, and he plunges into a miasma of self-pity. On another day, the two buddies go golfing. When a man in the foursome behind them hits a ball near them, Miles explodes and drives a golf ball into their cart. He is losing it, and Jack knows that it is his fault. On another double date, Miles fares better with Maya, but when she learns that Jack is about to get married, she tells Stephanie, who doesn't take this revelation well. On the final night of their journey, Jack is back to his old tricks and must call upon Miles to help him out when he gets in an embarrassing situation.

Anna Brown Lindsay has observed: "I used to think that friendship meant happiness: I have learned that it means discipline. Seek how we may, we shall never find a friend without faults, imperfections, traits and ways that vex, grieve, annoy us. Strive as we will, we ourselves can never fully fulfill the ideal of us that is in our friend's mind: we inevitably come short of it." Director Alexander Payne has made another character-driven movie that draws out our sympathies and challenges us to a new respect for the patience that friends must have for each other's foibles. While his previous film, About Schmidt, had humorous elements, this on-the-road jaunt is a laugh riot. The director co-wrote the screenplay with Jim Taylor based on a novel by Rex Pickett.

These two middle-agers wrestle with the demons of regret and a feeling that their best years are over. They both yearn for something more and on their week together come to grips with their limitations and how much they each need a friend. Paul Giametti is sensational as the pessimistic, self-deprecating wine snob, and Thomas Haden Church is a hoot as the sex-driven hedonist. Sideways is a delight from start to finish — a round-trip ticket to the rewards of friendship and the follies and the frustrations of middle-age. 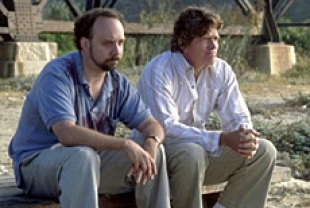 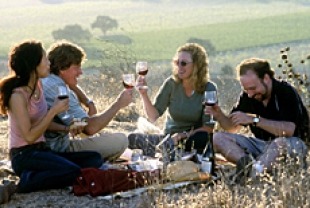 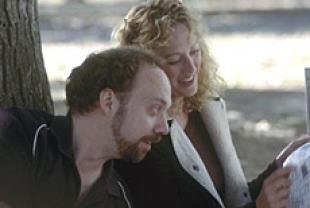