Directed by Wayne Wang
A magical story about a lonely girl whose life is transformed by a stray dog with a spiritual gift for bringing her together with just the right people.

Opal (AnnaSophia Robb) is a very lonely young girl. She has just moved to Naomi, Florida, with her father, the Preacher (Jeff Daniels), the minister of the small town's Open Arms Baptist Church. The members of the congregation bring their own backyard chairs for the meetings at a convenience store on Sunday mornings. Opal looks around the gathered group and realizes that none of the other children are very friendly: Amanda (Courtney Jines), who always has a sour look on her face; Sweetie Pie (Elle Fanning), who has a bad habit of chewing her knuckles; and the two nasty Dewberry brothers, Dunlop (Nick Price) and Stevie (Luke Benward), who seem to enjoy taunting her.

Then one day everything changes for Opal. Sent to the store for a box of macaroni-and-cheese, some white rice, and two tomatoes, she witnesses the commotion that ensues when a stray dog runs wildly down the aisles of the store sending cans and boxes flying as clerks try to catch him. Opal's heart goes out to the dog, and she tells the manager that the animal belongs to her and that he is named Winn-Dixie after the chain of stores.

At their new home at the Friendly Corners Trailer Park, the Preacher is not happy about the newcomer in their already cramped living quarters. To make matters worse, the cantankerous landlord hates dogs and immediately takes a disliking to Winn-Dixie. Opal misses her mother, a fun-loving woman who abandoned her when she was only three years old. The Preacher is reluctant to talk about her and spends much of his time sitting at his desk in depression. Opal describes him as a turtle hiding inside its shell. With very little to keep herself busy, she takes a job at a pet store that is managed by Otis (Dave Matthews), a clerk who soothes the animals with guitar music. Opal's goal is to earn enough money to pay for a collar for Winn-Dixie.

This friendly dog has a way of seeking out new acquaintances for Opal. He takes her to the library, and she meets Miss Franny (Eva Marie Saint), who has been working there all her life. She has no family and is fixated on her memories of the past. She tells Opal, who loves stories, about her grandfather who lost everything in the Civil War and created a candy that tastes of sadness and sweetness. Sharing a lozenge with Amanda who turns up at the library, Opal learns that her brother recently drowned. Everyone, it seems, has a share of sadness — not just the Preacher.

Winn-Dixie also leads her onto the hidden property of Gloria Dump (Cicely Tyson), whom the local kids call the wicked witch of Naomi. She is a recovering alcoholic who has tied bottles to a gigantic tree to hold the ghosts of her past transgressions. Although Gloria's sight is very poor, she can see clearly that Opal is in need of companionship and the kind of wisdom that can only come from someone who has survived many trials and tribulations. The little girl opens up her heart and shares all her woes, especially how much she misses her mother and wishes that she knew more about her.

Wayne Wang directs this enchanting drama based on a Newbery Award-winning book by Kate DiCamillo. It is the fourth film he's directed from a literary work following The Joy Luck Club, Anywhere But Here, and Smoke. In an interview Wang has stated: "I generally make movies about something that is missing in our lives, empty places that we're trying to fill up. I am always attracted to stories about people longing for and finding deep contact with others, about lonely people struggling for some sense of connection. In Opal's case, she has experienced the unexplained loss of a parent. This book really touched me in a way that is difficult to describe. It has humanity and a simplicity that profoundly affected me."

The screenplay by producer Joan Singleton magically conveys the rainbow colors of a small circle of lonely individuals in Naomi that are enriched thanks to Winn-Dixie. He has a special knack for seeking out strays like himself and bringing them together in community. And he actually smiles! There are no villains in this wonderful town and even those who are most disagreeable to Opal are transformed once she understands that everyone is carrying some pain and loss.

For those who have experienced the joy and edification only animals can bring, Winn-Dixie's gifts will seem totally natural, delightful, and uplifting. We are sad when he freaks out during thunderstorms, and we are amused when he delivers a mouse he captures to Preacher during the Sunday morning service. Winn-Dixie even tolerates a parrot who sits on his head. He finds the good in others and serves as a midwife to Opal's reconciliation with her father and a final mutual coming-to-terms with the woman who left them both behind years ago. You couldn't ask for a better spiritual teacher. 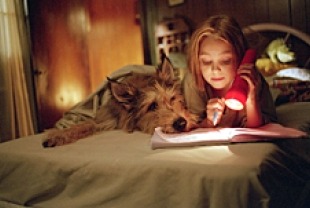