Directed by Bahman Ghobadi
A mesmerizing film set in Iraq that deals with the fallout from both dictators and liberators on the torn lives of children living in refugee camps.

In a refugee camp near the Turkish border in Kurdish Iraq in 2003, a 13-year-old boy nicknamed Satellite (Soran Ebrahim) has become the leader of a motley gang of children, many of whom have lost limbs to landmines. Resourceful when he needs to be and cantankerous when he's pushed, he finds a satellite dish for a village of frightened people who want to know when the United States will launch its attack on Iraq. Once he installs it, the elders and the governor want Satellite to translate the news for them and also block out all the images of sexy women in music videos. The boy says that he was hired to set up the dish and nothing more. Asked to translate the English, he says that it is going to rain the next day.

Assisted by two friends, the one-legged Pasheo (Saddam Hossein Feysal) and the melancholy Shirko (Ajil Zibari), Satellite assigns the refugee children various jobs in the rugged countryside littered with landmines, spent shells, and wrecked and rusted vehicles. He notices Agrin (Avaz Latif), a pretty refugee who has just arrived in the camp with her armless brother Hangao (Hiresh Feysal Rahman) and Rega (Abdol Rahman Karim), a blind toddler. When Satellite sees Hangao defuse a landmine by pulling the pin out with his mouth, he is not impressed but jealous of a new rival. The fearless newcomer has another even more desirable talent — he can foresee the future. He warns Satellite to get all the kids off a truck loaded with shell casings just before it explodes.

Everyone is apprehensive about the new dangers on the horizon. Remembering the past, the Kurds hand out gas masks to protect against chemical attack. Satellite makes sure that Agrin gets one and promises to find one for the blind boy. In a very poignant scene, the child wanders around a dump where empty shell casings have been stacked. He mournfully yells "Daddy" but there is no answer. Later Satellite finds him alone at the border fence facing an armed Turkish guard. Trying hard to impress Agrin, Satellite dives in a pond to try to bring her a gift of red fish, but she walks away while he is underwater. She is carrying a deep psychological scar from being attacked by soldiers and seeing her parents killed. She walks like a zombie through this landscape of poverty, helplessness, and hopelessness.

This riveting and heart-breaking Iranian film is written and directed by Bahman Ghobadi whose film A Time for Drunken Horses was also about the desperate measures taken by children to survive in a milieu of death and destruction. The setting for that story was a mountain region on the Iran/Iraq border. Ghobadi has dedicated Turtles Can Fly to "all the innocent children in the world — the casualties of the policies of dictators and fascists."

Set against the miserable living conditions in the refugee camp, which has no electricity and no running water, are the images coming over the satellite of the wealth and power of the West. The landmines the children collect from the fields to sell to the U.N. or to arms merchants can explode at any moment, and the best ones, says Satellite, are "made in America." In war zones around the world, even for years after the end of combat operations, these weapons continue to take lives and limbs, ugly and dangerous imports from the supposedly free world.

In one of the most telling scenes, American helicopters fly over the refugee camp. The villagers and refugees have fled to a hillside where they are trying to look like trees so they will not be bombed. The Americans drop leaflets saying, "We will make this country a paradise. We are here to take away your problems. We are the best in the world." For a while, Satellite and his assistants truly believe them. He advises the children, "There's money in 'Hello' these days." But the real truth teller is not on television or in the propaganda floating down from the sky. It is in the prophecies of Hangao, the armless boy who loves his sister and the blind boy and is helpless to save them. The shattering closing events in this incredibly moving film include an act of compassion by Satellite which costs him dearly and a touching gift from Shirko — a souvenir from the fallen statue of Saddam Hussein in Baghdad. Don't miss this important, powerful, and prophetic film. 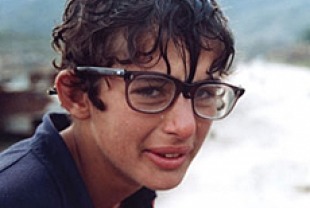 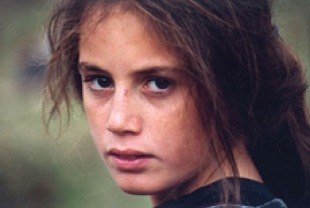 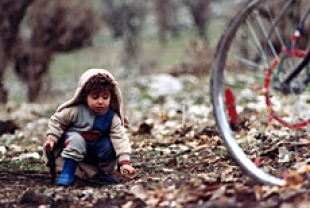