Directed by Herbert Ross
A lively and entertaining youth drama about the coming of change in a repressive small town.

Ren (Kevin Bacon) has moved with his mother from Chicago to Bomont, a small Midwestern town. He knows that he is in alien territory when he learns that Kurt Vonnegut's Slaughterhouse Five may be removed from the high school library and that listening to rock music and dancing have been banned by the conservative town council. When Ren beats out the town bully, Chuck (Jim Youngs) in a rural version of chicken played with tractors, he wins the respect of Willard (Chris Penn) and other classmates who rally around his standard of individuality.

He soon discovers, however, that his ideas of what teenagers should do are in sharp contrast with the dictates of the Rev. Shaw Moore (John Lithgow), a very influential preacher who blames music and dancing for the tragic automobile death of his son years earlier. His daughter Ariel (Lori Singer), quite a "hellraiser" in her own right, ditches her boyfriend Chuck and teams up with Ren. Along with other members of the senior class, they petition the town council to allow them to have a dance. The dramatic high point of the story comes when Ren presents Scriptural proof from Psalm 149 and the story of David that dancing can be a form of prayer and a celebration of life. This leads the film into an up-tempo finale.

As a social document, Footloose presents a convincing portrait of the religiously inspired conservatism and censorship that has stifled many American communities. Instead of making the minister into a caricature, however, screenwriter Dean Pitchford has created a refreshingly vulnerable human being capable of repentance and renewal.

Footloose, directed by Herbert Ross, has something for all age groups: a message that love and respect for young people begins where censorship and manipulation end. Equally on target is the celebration of youthful vitality which can and should find its outlet in music and dance. The lively rock soundtrack contains selections by Kenny Loggins, Jim Steinman, Bonnie Tyler, Deniece Williams, Eric Carmen, Sammy Hagar, and others. 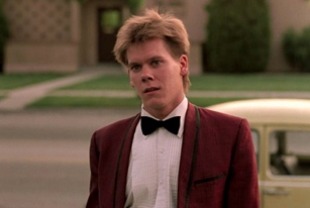