Directed by Michael McGowan
A heartfelt story about a teenager who proves that ordinary individuals can do extraordinary things through strong intention, fiery determination, and a little help from their friends.

"Where there is great love there are always miracles. Miracles rest not so much upon faces or voice or healing power coming to us from afar off, but in our own perceptions being finer."
— Willa Cather

FOREWORD:
We live in an age hungry for extraordinary events. The Germans have a word for this — wundersucht, which means "a passion for miracles." Thousands of pilgrims flock to places that report healings of terrible diseases or supernatural phenomena such as weeping statues. Polls of the American public reveal 83 percent believe in miracles. Yet many remain skeptics. Sure, saints of the past have had miracles attributed to them but where are the substantiated reports of miracles performed by modern age individuals?

Quite a few thought-provoking films have touched on miracles and people's varied responses to them (see the list below). Now we can add to the list this heartfelt and endearing Canadian film written and directed by Michael McGowan. He has assembled a remarkable cast of actors to deliver this drama about a boy who takes on a big challenge in hopes of receiving in exchange a miracle cure for his mother who is in a coma.

THE STORY:
Ralph Walker (Adam Butcher) is a fourteen year old who attends St. Magnus Catholic High School in Hamilton, Ontario. He is viewed as both a weakling and a loser by the bullies in his class. Ralph is living alone in his grandparent's house and, with the help of his best friend Chester (Michael Kanev) who forges notes in his grandmother's name, has kept this secret from Father Fitzpatrick (Gordon Pinsent), the authoritarian headmaster. In a prank when one of the older boys pretends to be a priest in the confessional, Ralph admits to taking the Lord's name in vain 211 times, having 22 impure thoughts during the week, and abusing himself many times. After an incident at the local swimming pool when he is caught peeking into the girls' dressing room, Ralph is called into Father Fitzpatrick's office. As a disciplinary measure, he is assigned to join the cross-country team coached by Father Hibbert (Campbell Scott), who has already gotten the boy's attention by teaching Nietzsche in his religion class.

Perhaps the burden that weighs heaviest upon this rebellious youth is the serious illness of his hospitalized mother, Emma (Shauna McDonald). Ralph is very close to her since his father died in World War II. When she lapses into a coma, he is devastated and at a loss what to do. The doctors say it will take a miracle to wake her up. In class Ralph learns from Father Hibbert that miracles can happen but you must nurture them with three things: faith, purity, and prayer. These present quite a challenge to Ralph.

When Ralph discovers that he has a talent for running, he becomes convinced that he should run in the Boston Marathon. Told it would take a miracle for him to win this prestigious race, he connects the dots and decides that by winning he can also effect his mother's cure. But to pull off this seemingly impossible feat, the loner has to enlist the help of a wider community of people than Chester.

Ralph goes to the library and checks out a book by Tom Longboat, a famous Canadian long-distance runner who won the Boston Marathon in 1907. He has plenty of advice about the rigors of training and the value of thinking positively. Having been spurned by an attractive girl, Claire Collins (Tamara Hope), who says she is going to enter a convent and become a nun, Ralph picks up some hints from her on making the body and soul strong through ascetical practices. They attend Holy Thursday services together.

Father Hibbert, Ralph learns, is an ex-marathoner who was to compete in the Olympics until he injured his knee; he volunteers to be his coach. Nurse Alice (Jennifer Tilly), the woman who looks after Emma, even contributes to the boy's impossible dream by helping him build up his body with weight training. After losing his first race, Ralph wins a local competition and ups the ante with his training. Meanwhile, Father Fitzpatrick finds the boy's idea of making a miracle sacrilegious and believes that he needs to "to learn his place in the world." As the day of the Boston Marathon approaches, Ralph faces many obstacles but he remains committed to his dream.

BEFORE YOU SEE THE FILM:

Miracles are usually associated with the ardent faith of saints who lived long ago. In this drama, we see that ordinary individuals can do extraordinary things through strong intention and fiery determination. Miracles defy logic and the consensus view of reality, whether they are extraordinary healings by saints or powerful transformations experienced by ordinary people.

Amazing things abound in the lives of those who are open to them. God works in mysterious ways. Everything counts in life. Those are some of the themes of Saint Ralph. This is the kind of movie that will leave you feeling uplifted and convinced that miracles do happen when we act out of love for another and are willing to ask for and receive help.

The DVD includes an audio commentary with director Michael McGowan and a Behind-the-Scenes Featurette. 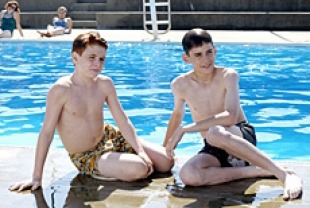 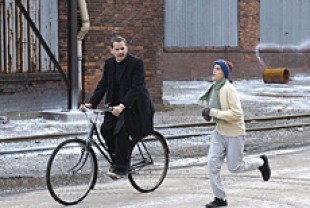