Neither Wolf Nor Dog A Values & Visions Guide

A Discussion Guide covering themes in the film about a white writer's conversations with a Native American elder. Recommended for people interested in finding spirituality at the movies.

Neither Wolf Nor Dog, directed by Steven Lewis Simpson, is based on the classic book about Native American spirituality by Kent Nerburn. The subtitle of the book, On Forgotten Roads with an Indian Elder, is a good description of this film. While the film and the book are not identical, both Simpson and Nerburn had as their highest value to remain true to the experience of Dan (played wonderfully by then 95-year-old Dave Bald Eagle -- now deceased) and the Lakota people’s experience.

Dan’s father always told him that he saw with "two eyes" — he was a keen observer of both native and the dominant "white" culture. Now an old man, he asks Nerburn, a white college professor who had worked with Native students on a reservation in Minnesota, to write his story in a book that reads "like I went to Haskell" (the BIA school in Lawrence, Kansas) so whites could understand.

Their conversations which follow offer deep insights into the lived experience of this elderly Lakota man and his family. They also reveal common reactions to well-meaning whites who want to understand and respect native culture, but often blunder.

Christopher Sweeney plays the part of Nerburn, and Dan’s friend and sometimes interpreter, Grover, is played by Richard Ray Whitman. While less central, the parts of Dan's two granddaughters, Wenonah and Danelle, are skillfully played by Roseanne Supernault. (I did not realize that they were played by the same actor until I met her at the San Diego film festival.)

The film was shot on the Pine Ridge Indian Reservation in South Dakota and the stunningly stark scenery is a most appropriate backdrop to the story. Scenes on the road mirror the difficult and bumpy quest for understanding and meaning sought by all the characters.

It is notable that two white men – Simpson and Nerburn – were able to communicate so authentically the experiences and perspectives of Native Americans — men and women from three generations. They never lost sight of the many ways they and other whites "don’t get it" and owned their misinterpretations and mistakes. This kind of story is needed more than ever in these days when people all over the world are being challenged to examine our values and to decide how the common good can be the foundation of our wider communities.

The following questions for discussion touch on key themes in the movie. The film runs 110 minutes and is not rated. The Spirituality & Practice review by Frederic and Mary Ann Brussat is here.

"It’s a good idea to stay quiet around white people. They can’t stand the silence and pretty soon they will talk and reveal their hearts. Silence is stronger than words." [Dan]

"You don’t even show him any respect." [Wenonah]

"Soldiers did the dirty work for the politicians so they could have our land without paying for it." [Dan]

"No Indian alive dares to think too much of the past." [Dan]

"Tell your people your shame. I appreciate that." [Dan to Kent]

"You have to learn to listen before you can learn to see." [Grover]

"You took the sacred out of everything." [Dan]

White people try "to change the land instead of live with it." [Grover]

"Just because some things are written doesn't mean it's the truth." [Dan]

"The men were warriors. They had honor. But there were so many of you. Now all they have is shame." [Danelle]

"The old ways is the only way he knows." [Winonah]

"Now I understand why you brought me here." [Nerburn]

Linda J. Vogel is Professor Emerita at Garrett-Evangelical Theological Seminary in Evanston, Illinois, where she served as a professor of Christian education. She and her husband Dwight had a home for many years in the Black Hills of South Dakota. 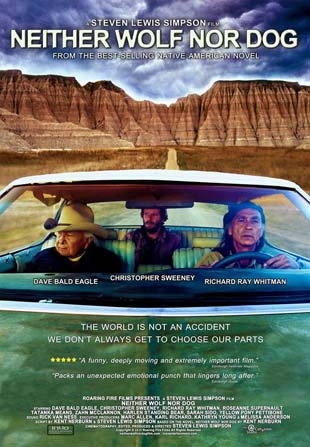 Film Review: Neither Wolf Nor Dog

Book Review: Neither Wolf Nor Dog