An examination and a case for dispelling the many stereotypes of Islam.

My book, Islam: A Concise Introduction lifts the chapter on Islam from The World's Religions and was published as a small, free-standing book to help satisfy the hunger in America today for knowledge of this global faith. There are good reasons for this hunger. There are an estimated 1.2 billion Muslims in the world today — one out of every five persons on our planet is a Muslim — and Islam is probably the world's fastest growing religion. And it is no longer, strictly speaking, a foreign religion. There are somewhere between four and seven million Muslims who are United States citizens, which means that they already outnumber Episcopalians and Presbyterians, and their proportion in relation to other denominations is growing.

The chief reason for the spike in interest in this religion, however, is its involvement in the toppling of the World Trade Buildings and the strike on the Pentagon in September 2001. What kind of religion could be involved in terror of these proportions?

The book does not speak directly to that question: it provides background information for those who ask it. Islam has been around for fourteen centuries, and if civilization manages to survive will be around for as many more. It is the foundations of this faith that the book places in the reader's hands.

Those foundations need to be understood, and currently in the West they are not. No one has pointed this out more tellingly than columnist Meg Greenfield in 1979, when the Ayatollah Khomeini seized the American embassy in Iran and held 21 Americans hostage. As her words are even more apposite today than they were then, I will quote two paragraphs from them."We are heading into an expansion of American involvement with that complex of religion, culture and geography known as Islam. There are two things to be said about this. One is that no part of the world is more important to our own well-being at this moment — and probably for the foreseeable future. The other is that no part of the world is more hopelessly, systematically and stubbornly misunderstood by us. "Why is this? In part, because it is virtually impossible for us to understand a world in which religious and civil power are thought to be the same. We are just not able to imagine the circumstances in which we would lodge religious beliefs not only at the center of our individual conduct, but also at the center of our politics."

Truer words were never spoken, and it would be presumptuous to think that one small book will dispel that misunderstanding. But it can do something toward dispelling three stereotypes about Islam, and to that end I will devote the remainder of this paper.

The first stereotype concerns violence. The popular Western image of Islam is that it is the most violent of the great religions, but neither the Koran nor history support this view. The Koran contains 192 references to Allah's forbearance and mercy, as compared with 17 references to his judgment and wrath; and though there are violent injunctions in the Koran, they do not outweigh their counterparts in the Bible. Moreover (a point that is often overlooked by commentators who quote the Koranic passages out of context}, they relate specifically to occasions when Muhammad was fighting for the life of the revelation that had been entrusted to him. Muslims have continued to fight over the centuries — tragically, wars scar the history of all religions — but I shall leave assessing the record to Norman Daniel, whose Islam and the West: The Making of an Image, is the most serious attempt that has been made to compare the use of force in Islam and Christianity. His conclusion is that what can be safely said is that Islam has resorted to violence no more than has Christianity, while adding that that is probably a conservative estimate. As an example he points to Spain and Anatolia which changed hands at about the same time. In Spain Christians killed, expelled, or forced conversion on every Jew and Muslim in the land, whereas the seat of Orthodox Christianity remains in Constantinople to this very day.

The word Islam means explicitly "surrender," but it is related to the Arabic word salam, meaning "peace," as in the standard Islamic salutation as-satamu 'alaykum, peace be upon you. And when a virtuous Muslim enters heaven, it is said, the only word he will be able to utter for three days, over and over, is "peace," so overwhelmed will he be by the total realization of the condition he has been longing for his entire life. Between the bookends of Islam's name and its complete realization in paradise stands history, and it is instructive.

When the Prophet Muhammad brought the Koranic revelation to 7th century Arabia, a major part of his mission was to bring to an end the inter-tribal warfare that was wreaking havoc in the region. Pre-Islamic Arabia was caught up in vicious cycles of warfare wherein tribes fought one another in vendettas and revenge. At the start the Prophet and his cohorts had themselves to fight in order to survive, but once their foothold was secure, Muhammad turned his attention to building peaceful coalitions between tribes, so successfully that when he died he left as his political legacy a solidly united Arabia. And into warfare the Prophet introduced chivalry. No holds were barred in pre-Koranic warfare, but Muhammad introduced many traditions of forbearance. Agreements are to be honored and treachery avoided. The wounded are not to be mutilated nor the dead disfigured. Women, children and the old are to be spared, as are orchards, crops, and sacred objects — no scorched land policy or leveling of Hindu temples in Koranic Islam.

The key and inflammatory issue, though, is jihad. Literally the word means only effort, exertion or struggle, but it has taken on the meaning of Holy War. No full-fledged religion has been able to manage without a doctrine something like this — complete pacifism remains for smallish sects such as the Menonites and Quakers. Naked aggression must be halted and murder, pillage, and rape defended against. So far, so good. What is not good is that jihad has been turned by outsiders into a rallying cry for hatred against Islam — mention of the word conjures /uploads/features/images of mobs streaming through streets destroying everything in sight — while within Islam fundamentalists seize on jihad as a rallying cry for their political ends. The truth of the matter is that Islam's concept of Holy War is virtually identical with the Just War doctrine in Christian canon law, right down to the notion that martyrs in both are assured of entry into heaven. In both cases the war must be defensive or to right a manifest wrong. Chivalry must be observed and the least possible damage inflicted to secure the end in question. And hostilities must cease when the objective is accomplished. Retaliation is forbidden.

So, to face the hard question, were the destructive acts of September 2001 jihad? If the perpetrators saw those acts as responses to: the stationing of US troops on sacred soil of Saudi Arabia, or continuing Israeli settlement of the West Bank, or the boycott cordon around Iraq and daily unmanned bombing of her territory, all regarded as acts of aggression against dar al-islam, the House of Islam — to repeat, if the perpetrators of the damage saw their acts as responses to what they saw as aggression, they doubtless saw themselves as waging jihad. Otherwise it was mass murder.

On the second point of misunderstanding, the place of women in Islam, I can be brief. When I first wrote these lines (October 2001) the treatment of women in Afghanistan is as inhumane as can be imagined, but that has nothing to do with Islam. One of the most important principles in trying to understand another religion is to distinguish between its defining features and the cultural baggage it has picked up along the way. One of the times this distinction was brought home to me was when I was looking into the differences between the Protestant and Russian Orthodox missionary approaches to the Alaskan Eskimos. The Russian missionaries adapted the Christian message to Eskimo culture in every way possible. They learned its languages, adopted Eskimo dress, and even incorporated local deities into the Christian angelic pantheon. By contrast, the Protestant missionaries seemed bent on Americanizing their converts in the process of Christianizing them — teaching them English, dressing them in business suits, the works. Coming upon this second group of converts, a stranger who was ignorant in these matters might easily have assumed that western garb was an ingredient of being Christian.

The actual status of women in the Koran bears no resemblance to the western stereotype, which is woven mostly of local customs that Muslims have assimilated. Muhammad's wife was educated, intelligent, and a highly successful business woman. Actually this issue can be resolved quite simply. I suspect that many of us know Muslim women who hold important positions in American society — my roster includes a physician, a teacher, a television director and a successful shopkeeper — who feel no conflict between their religion and their position in western society.

One of my favorite sayings of the Prophet that has received little notice has at least an indirect bearing here, so I will use it to round off this section on women. On one occasion a companion of the Prophet heard a bystander ask him, "Who is most entitled to my good conduct?" The Prophet replied, "Your mother." "Then whom?," the man asked. Again the Prophet answered, "Your mother." The question was repeated a third time and received the same answer. It was only when the questioner asked his question a fourth time that the Prophet said, "Your father."

Finally, fundamentalism. Islamic fundamentalism is very different from Christian. Both share as their root cause the sense of being threatened, but by different things. Christian fundamentalism took shape in the early 20th century as a reaction against the threat (as seen by conservative Christians) of, first, Darwinian evolution which seemed to challenge the Biblical teaching that human beings were created directly by God; and second, the threat of "the higher criticism" which applied the tools of literary criticism to analyze the Bible as if it were any other book.

Islamic fundamentalism centers in the Middle East. The reason it flourishes there is that 80% of the Muslims are traditional in their outlook and way of life, while the 20% that rule them have been educated in the West and are modem in their life style and views. It takes no great feat of imagination to sense the threat the traditional majority feel from the ruling minority, and it causes them to dig in their heels. Two worlds, the old and the new, are in sharp collision.

The permutations of this conflict vary from region to region and are far too complex to enter into here. Moreover, to enter that domain would run counter to the intent of this reflection. I have used it to say a few words about several issues that are bound to be in the reader's mind since the September 2001 atrocities, but nothing has happened to alter the foundations of this faith. Those foundations must provide the background for everything else one says about Islam, and to my knowledge they are presented accurately in my book, Islam: A Concise Introduction.

This reflection was contributed to Spirituality & Practice for the anniversary of 9/11 by Huston Smith, writer, professor of world religions and one of our Living Spiritual Teachers. 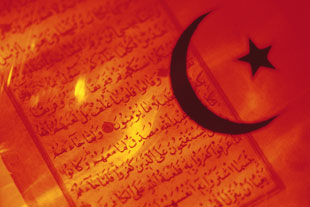