Anniversary of Bombings of Hiroshima and Nagasaki August 6 and 9

Observing the anniversary of the bombing of Hiroshima and Nagasaki with a DVD, prayers and a remembrance litany.

On August 6, 1945, the United States dropped an atomic bomb on the Japanese city of Hiroshima. Three days later, on August 9, another bomb was dropped on Nagasaki. These nuclear weapons killed over 270,000 people, almost all civilians, and injured many tens of thousands more. By all measurements, this aggressiveness qualifies as a crime against humanity. Ever since, people around the world have lived with the fears of the Nuclear Age. Deadly weapons loom over humanity like great clenched fists, shaping the characters of nations and troubling international diplomacy. The threat of nuclear annihilation has influenced entire generations, coloring their attitudes toward the future, family, marriage, work, time, leisure and death.

To observe the Anniversary of the Bombings of Hiroshima and Nagasaki:

View the DVD Hiroshima No Pika & Hellfire, a two-part documentary. The first is an animated film of the award-winning children's book Hiroshima No Pika narrated by Susan Sarandon with illustrations by the Japanese artist Toshi Maruki. Here is a simple but moving account of the experiences in the city of a little girl and her parents. The second part charts the amazing careers of this artist and his wife whose courageous creations have presented a monumental portrait of the slaughterhouse of the twentieth century.

Remember the bombings in your congregation or community with this prayer from the Interfaith Council for Peace and Justice.

A Bowl Full of Peace is the true story of Sachiko Yasui, who as a child was an eyewitness to the atomic bombing of her hometown, Nagasaki. She has devoted her life to sharing her hope for peace with each new generation.

Her mother offered a powerful and moving practice for remembering the anniversary of the bombing. Into a bowl passed down by generations in the family — a bowl that survived the blast without a chip or crack — she places ice, saying softly:

We must never forget what happened on this day.
Remember how a chip of ice eased our thirst?
As the ice melts, let us remember all who suffered
and all who died. We must pray that
such a terrible war never happens again. 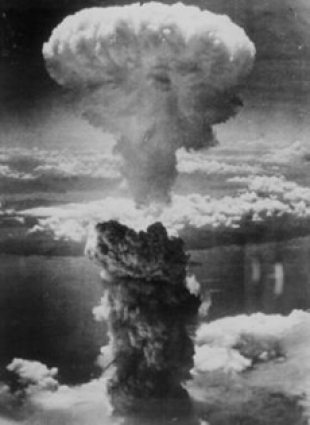